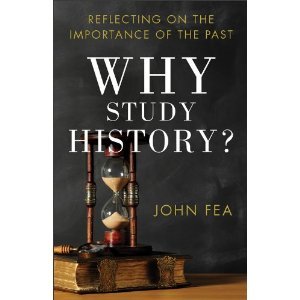 [youtube https://www.youtube.com/watch?v=tmLh2LMT2Gc&w=560&h=315] My family has a New Year’s Day tradition of watching the Twilight Zone marathon on the Sci-Fi Channel. (This year the marathon extends over several days).  Rod Sterling’s show appeared on network television in the early 1960s.  Many of the episodes revolve around Cold War themes–either directly or indirectly.   When episodes focus on the tension between individualism and social conformity, individualism always comes out on top.  Louis Hartz must have loved this show.
One of my favorite Twilight Zone episodes is “A Stop at Willoughby.”  I actually wrote about it in my book Why Study History?: Reflecting on the Importance of the Past:
…For others, the past is useful because it provides an escape from the pressures and anxieties of modern life.  One of my favorite episodes of the 196os television show The Twilight Zone is titled “A Stop at Willoughby.”  The episode features a stressed-out New York advertising executive, named Gart Williams, who is growing tired of the corporate rat race and an overbearing wife who only married him for his ability to provide her with a comfortable upper-middle-class life in the suburbs.  One day on his train commute from New York City to his home in Connecticut, Gart falls asleep and dreams that the train, which has turned into a late-nineteenth-century rail coach, has stopped at a placed called “Willoughby,” and the year is 1888.  The conductor tells him that Willoughby is a “peaceful, restful place, where a man can slow down to a walk and live his life full measure.”  Gart glances out the train window and sees a small town with an old-fashioned bandstand, high-wheeler bikes, horse-drawn carriages, and couples strolling through the park.  He eventually wakes from his dream, but he becomes fascinated by this town that his imagination created.  The following week Gart

dreams again about Willoughby and tells himself that the next time the train stops at this fictional town, he is going to get off and leave his old life behind.  After another stressful day at work, which leads to a mental breakdown, Gart quits his job and boards his train back to Connecticut.  He dozes off again and starts to dream about his late nineteenth-century paradise.  This time he gets off the train at Willoughby, where he is greeted by the town’s friendly residents who invite him to join them in their idyllic life.  At this point, fitting the eerie nature of The Twilight Zone, the scene shifts back to a modern-day train conductor standing in the snow over Gart’s lifeless body.  He tells the police that Gart shouted “something about Willoughby” as he leaped from the moving train to his death.
“A Stop at Willoughby” is a popular episode because we can all relate to the plight of Gart Williams.  We all long for a world that has been lost–a haven where we can escape the pressures of daily life.  The past, or at least the re-creation or re-enactment of the past, can provide such a haven.  One website describing Colonial Williamsburg encourages potential visitors to “escape to the 18th century in the world’s largest living-history museum.”  Renaissance Faires attract thousands of visitors each summer, where attendees wear period clothing and come back each weekend to immerse themselves in a different time.  Other people prefer to visit a historical site or read historical fiction or nonfiction books as a kind of time travel to a world that was simpler.  These kinds of nostalgic longings fuel a billion-dollar tourism industry.
As David Lowenthal writes,
“The past offers alternatives to an unacceptable present.  In yesterday we find what we miss today.  And yesterday is a time for which we have no responsibility and when no one can answer back.  Some prefer to live permanently in the past; others elect to visit it only occasionally.  Even if today is rewarding and the past no golden age, historical immersion can alleviate contemporary stress.”
For some, the practice of getting lost in the past is a great form of therapy.