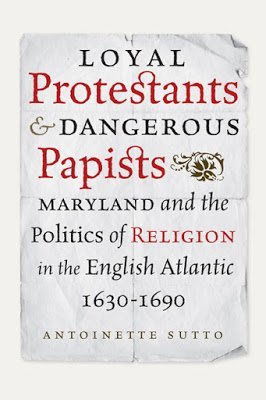 Antoinette Sutto is Assistant Professor of History at the University of Mississippi. This interview is based on her new book, Loyal Protestants & Dangerous Papists: Maryland and the Politics of Religion in the English Atlantic, 1630-1690 (University of Virginia Press, 2015).

JF: What led you to write Loyal Protestants & Dangerous Papists?

AS: I wanted to write about politics and religion in the early modern English world – how ideas about subversion and conflict and threats to law and order were shaped by ideas about religion and allegiance. Maryland was an ideal place to do this because in the seventeenth century, it was a colony run by Catholics that formed part of a growing empire ruled by Protestants. As I discovered in the course of researching and writing, the process of extending lines of authority across the Atlantic forced seventeenth-century people to confront the same questions about law, loyalty and confessional difference that caused a civil war and a revolution in the British Isles.

JF: In 2 sentences, what is the argument of Loyal Protestants & Dangerous Papists?

AS: The book argues that the violent and colorful history of early Maryland is most intelligible when placed in the context of the troubled politics of religion of the seventeenth-century English Atlantic. Ironically, some of the most specifically American aspects of Chesapeake life – the challenges of diplomacy between Indian nations and Europeans, the ups and downs of the tobacco trade – proved so destabilizing because they seemed to fit within familiar European narratives of conspiracy and subversion.

JF: Why do we need to read Loyal Protestants & Dangerous Papists?

AS: This book explores the local, regional and imperial politics of Maryland (and to some extent Virginia) in the 1600s. But the scope of the book is larger than the Chesapeake itself. It’s about the history of ideas in the early modern world, and especially about how ideas and material circumstances – trade, disease, demography, economic expansion – are connected. Parts two and three of the book are about the interaction between the American continent and the English Atlantic and describe how the politics of the American continent and American people, many whose activities and concerns were not known to Europeans, meshed with the tensions of the English Atlantic to create a crisis in the Chesapeake. The book also grapples with the category of Atlantic history – whether and under what circumstances it is useful and how best to do it.

AS: When I took the PSAT in high school, the test included a questionnaire about your career plans. I remember filling in the bubbles for “history major” and “historian” for college plans and career, but I don’t remember why!  Later, I began my academic training as a history of early modern England, but I moved into early American history because I have always been fascinated by the moments at which Europeans’ plans and preconceptions about America (and Native Americans) encountered real people, landscapes and experiences.

AS: My next project will be about Puritanism in the colonial world and the United States. I want to write a book not about the Puritans themselves, but about how later colonists and Americans understood them. It’s a way to explore ideas about origins, nationality and changing understandings of how to write history.