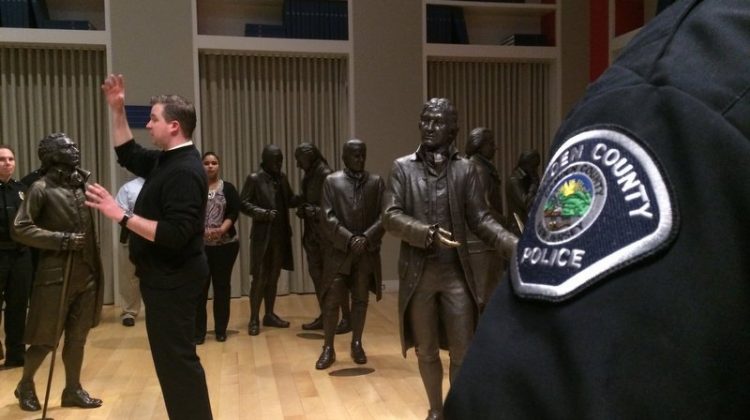 I love this story.  It encourages me to see history informing law enforcement in one of the most crime-ridden cities in the United States.  There may yet be hope for the humanities!

Here is a taste from a news story that appeared earlier this month at NJ.Com

Thursday morning was a change of pace for William Stuart.
While five weeks prior, the Camden County Police Officer was rushing through the halls of a shuttered Catholic school in Somerdale pursuing an active shooter during a drilling exercise, by 9 a.m. Thursday, he found himself in a much different kind of classroom.
Stuart was one of 50 department officers who crossed the bridge into Philadelphia to brush up on the backbone of American history at the National Constitution Center.
By the end of the week, all of the city’s 372 current officers and recruits in training will have cycled through the Center’s “Policing in a More Perfect Union” training module, which focuses on the role of the Bill of Rights in the American justice system and explores the history of policing in communities.
Chief Scott Thomson said he was drawn to the program after talking with Philadelphia Police Commissioner Charles Ramsey, who collaborated with the Constitution Center to cultivate the curriculum and launch the program in March.
“I wanted every one of our officers to have a better understanding of justice and fairness,” said Thomson.
The core concepts are driven home through a morning that begins with a tour of the center’s exhibits and presentations, delving into the roots of the Bill of Rights’ along with the evolution of law enforcement in American history. It wraps up with frank, open discussions about current perceptions of police both among the officers and in small groups with high school students from Philadelphia.
“The officers have already sworn to uphold the Constitution, they know this stuff,” said Kerry Sautner, the vice president of visitor experience and education at the National Constitution Center. She said the program aims to put a historical framework around the issues officers wrestle with daily.
“This is foundatinal, what they’re dealing with everyday is practical,” she said.
Camden County is only the third department to cycle its officers through the Policing in a More Perfect Union program — officers from Newport News, Virginia took advantage of it following Philadelphia’s recruits — but the results so far have been encouraging, said Sautner.
Officer Stuart said the historical perspective the program helped drive home the reality that current controversies surrounding police work are far from new. It showed him that conflicts are often sparked when police are caught between adapting to cultural shifts while enforcing laws that haven’t caught up to the times.
“It’s not new. It’s the exact same issues they experienced in the 1700s,” said Stuart. “We forget we’ve already done this and dealt with these issues throughout history.”
Chief Thomson said he wanted officers to be able understand the historical context of policing in minority communities, like how officers were responsible for enforcing fugitive slave laws in the 19th century and Jim Crow laws in the 20th, and how those roles have fueled a systemic distrust of law enforcement.
“40 years ago, we were on the wrong side of many issues,” said Thomson. Officers today may not have a hand in those wrongs, he said, but they deal with their social repercussions daily.