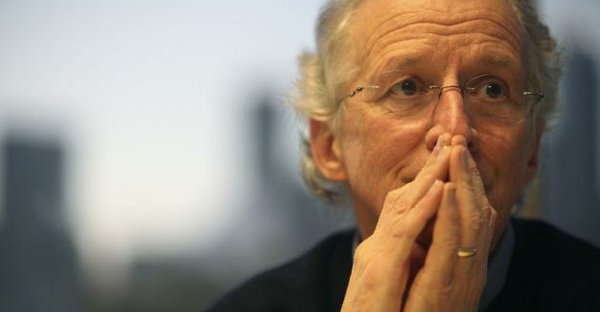 Some of my readers my be familiar with John Piper.  He is the retired pastor and founder of Bethlehem Baptist Church in Minneapolis.  He is a Calvinist theologian, author, leader of the so-called “Neo-Calvinist” movement in evangelicalism, lover of the theology of Jonathan Edwards, and chancellor of Bethlehem College & Seminary, also in Minneapolis.  He is known best for his affirmation of “Christian hedonism,” and his defense of a “complimentarian” view of gender roles,

At his website DesiringGod.com, Piper comes out in opposition to Jerry Falwell’s recent comments about guns at Liberty University.  It is a thoughtful and non-combative response.  Piper even called Falwell Jr. on the phone to make sure that he was representing his position clearly.

As chancellor of Bethlehem College & Seminary, I want to send a different message to our students, and to the readers of Desiring God, than Jerry Falwell, Jr., sent to the students of Liberty University in a campus chapel service on December 4.
For the sake of the safety of his campus, and in view of terrorist activity, President Falwell encouraged the students to get permits to carry guns. After implying that he had a gun in his back pocket, he said, “I just want to take this opportunity to encourage all of you to get your permit. We offer a free course. And let’s teach them a lesson if they ever show up here.” He clarified on December 9 that the policy at Liberty now includes permission to carry guns in the dormitories.
Falwell and I exchanged several emails, and he was gracious enough to talk to me on the phone so I could get as much clarity as possible. I want it to be clear that our disagreement is between Christian brothers who are able to express appreciation for each other’s ministries person to person.
My main concern in this article is with the appeal to students that stirs them up to have the mindset: Let’s all get guns and teach them a lesson if they come here. The concern is the forging of a disposition in Christians to use lethal force, not as policemen or soldiers, but as ordinary Christians in relation to harmful adversaries.
The issue is not primarily about when and if a Christian may ever use force in self-defense, or the defense of one’s family or friends. There are significant situational ambiguities in the answer to that question. The issue is about the whole tenor and focus and demeanor and heart-attitude of the Christian life. Does it accord with the New Testament to encourage the attitude that says, “I have the power to kill you in my pocket, so don’t mess with me”? My answer is, No.
Thanks to Justin Taylor for bringing this post to my attention. You can read it here. Piper boils his argument down to nine points. They are:
1.  The apostle Paul called Christians not to avenge ourselves, but to leave it to the wrath of God, and instead to return good for evil.
2.  The apostle Peter teaches us that Christians will often find themselves in societies where we should expect and accept unjust mistreatment without retaliation.
3. Jesus promised that violent hostility will come; and the whole tenor of his counsel was how to handle it with suffering and testimony, not with armed defense.
4.  Jesus set the stage for a life of sojourning in this world where we bear witness that this world is not our home, and not our kingdom, by renouncing the establishment or the advancement of our Christian cause with the sword.
5.  Jesus strikes the note that the dominant way (not the only) way Christians will show the supreme value of our treasure in heaven is by being freed from the love of this world and so satisfied with the hope of glory that we are able to love our enemies and not return evil for evil, even as we expect to be wronged in this world.
6.  The early church…expected and endured persecution without armed resistance, but rather with joyful suffering, prayer, and the word of God.
7,  When Jesus told the apostles to buy a sword, he was not telling them to use it to escape the very thing he promised they should endure to the death.
8.  A natural instinct is to boil this issue down to the question, ‘Can I shoot my wife’s assailant?” (he gives seven-fold answer to this question).
9. Even though the Lord ordains for us to use ordinary means of providing for life…nevertheless, the unique calling of the church is to live in such reliance on heavenly protection and heavenly reward that the world will ask about our hope (I Peter 3:15), not about the ingenuity of our armed defenses
I don’t always agree with Piper, but I can definitely get behind his theology of guns.