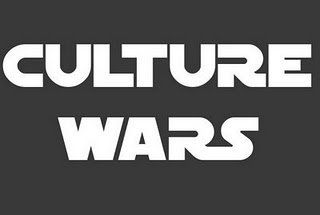 I am still debating whether or not I should attend the annual meeting of the American Historical Association in Atlanta from January 7-10, 2016. Though I am not presenting anything at this year’s conference, and my new book will not be out until late March, I am still tempted to make the trip so that I can cover the conference for The Way of Improvement Leads Home.  (Stay tuned: I will soon be posting a call for correspondents).

This morning I finally got around to skimming the program.  It is loaded with great sessions. The Mark Noll appreciation events will be hard to pass up.  So will so many intriguing sessions associated with the American Society of Church History.  The stuff on media, podcasting, and historical thinking looks great.

As I was jotting down possible sessions I might want to attend I came across AHA Session 3 on Thursday afternoon: “Are the Culture Wars History? New Comments on an Old Concept.”  I was attracted by the high-powered panel of historians–Andrew Hartman, Adam Laats, Natalia Petrzeal, Stephen Prothero, and Leo Ribuffo.  I marked it down as a must-attend panel.

Then I read the “Session Abstract.”  Here it is:

In 2012, Messiah College history professor John Fea set Glenn Beck and his followers ablaze when he claimed that Barack Obama might be “the most explicitly Christian President in America.”  Responding to the hundreds of angry comments he received, Fea wrote a follow-up post on the need for civility entitled “The Culture Wars Are Real.”  The title of Fea’s essay was old news, as Americans had been talking about the “culture wars” ever since the publication of James Davison Hunter’s 1991 book on the subject.  Yet Fea’s title also betrayed a tone of defensiveness—that maybe, for some, the culture wars weren’t and aren’t real.
The Fea incident was a reminder of everything that historians still don’t know about one of the most familiar analytical concepts of the past twenty-five years.  What precisely is a “culture war?”  If culture is always contested terrain, how is it possible to periodize just one or a set of battles?  Assuming that we can find beginnings, middles, and ends for America’s contemporary culture wars, is it possible to establish and prioritize causation (i. e., are the culture wars mainly about religion, race, gender, sexuality, science, or other)?  Finally, how do we situate America’s culture wars within larger structural contexts such as the Cold War, consumerism, deindustrialization, and suburban succession?  Considering those questions altogether, we might ask: Is it even possible for historians to narrate the culture wars?
Our five panelists think so.  Andrew Hartman, Stephen Prothero, Natalia Petrzela, and Adam Laats are united in that they each have highly anticipated new books on the culture wars to be published in 2015.  Beyond that, there is much less agreement between them .  In A War for the Soul of America, Hartman locates the origins of the culture wars in the Neoconservative response to the New Left.  To him, resulting struggles over racial, sexual, and religious politics are part of a larger contest over American identity.  Prothero’s Why Liberals Win makes explicit the long duree of the culture wars that Hartman hints at.  Prothero is also the only panelist willing to call a victor in past, present, and future fights over American manners and morals.  In contrast to the grand narratives advanced by Prothero and Hartman, Petrzela (Classroom Wars) and Laats (The Other School Reformers) offer several case studies of conflicts within education in order to illuminate the broader culture wars.  At the same time, Petrzela and Laats disagree about the causes of those battles.  Each presenter, in fact, differs in whether and how they view religion, race, and sex as explanations of American disunion.
As the culture wars necessitate writing history from the right, left, and center “all at the same time,” Leo Ribuffo is the ideal person to offer a final comment on these new works and the topic more generally.  This roundtable should have broad appeal as scholars of politics, culture, and religion continue to fight with each other over what exactly it is that unites and divides America.
I’m not sure how to respond to the fact that one of these fine scholars (the person who wrote the abstract) thought that my experience with Beck was worthy enough to frame a panel on the culture wars.  I think I am happy and flattered that people are reading the blog and taking it seriously.
By the way, you can read “T
he Culture Wars Are Real” here.
If you appreciate this content, please consider becoming a Patron of Current.