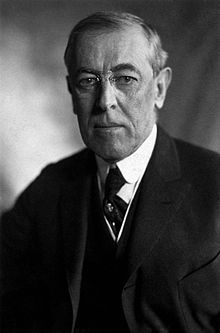 A few years ago when I wrote what turned into a controversial piece about Barack Obama’s faith, my office voicemail was filled with angry calls from Glenn Beck supporters.  As it turns out, Beck mentioned my piece on his radio show and his website The Blaze made it front-page news.  Several of callers had some pretty nasty things to say.  They told me that I was just as bad Louis Farrakhan, Adolph Hitler, and Woodrow Wilson.  I at least understood the references to Farrakhan and Hitler. But Woodrow Wilson? At least four different negative messages (there were no positive ones) referenced the 28th President of the United States.

After a quick Google search of “Glenn Beck and Woodrow Wilson” I realized that Beck had been spending a lot of time on his radio program and in his writings attacking Wilson’s “progressive” political views.  In fact, as Jonathan Zimmerman of New York University points out in his recent piece at Politico, Beck was calling for the removal of Wilson’s name from buildings at Princeton University, the place where he served as college president from 1902-1910.

As many of you know, Beck is not the only one who wants Wilson removed from Princeton’s campus.  A few days ago I weighed in on the whole Wilson– racism issue going on at the historic New Jersey university. I joined several of my fellow American historians in sympathizing with the university’s African-American students, acknowledging Wilson’s racism, and arguing against removing his image and name from campus.

Zimmerman’s piece reminds us that despite his racism, Wilson remains an important figure in the history of American progressivism.  He is so important, that conservatives like Beck, and more recently a writer at The Federalist, thinks he should go.

Here is a taste of Zimmerman’s article:

...On balance, though, the federal government has been a force for justice and equality across the past century. That’s especially the case when it comes to African-Americans, who continue to suffer discrimination and poverty in our society. But they also vote in overwhelming percentages for the party of Big Government, the Democrats, because they understand that their circumstances would be many powers worse without federal programs and protections. Public housing, Medicare, occupational safety, mass transportation … the list goes on and on. And they’re all legacies of the Progressive doctrines espoused by Wilson, who understood that modern Americans needed the assistance of a larger, more supple national state.
That’s also why Glenn Beck despises him. So does the newly elected speaker of the House, Paul Ryan, who blasted Wilson and his fellow Progressives in a 2010 interview with Beck. “I see Progressivism as the source, the intellectual source for the Big Government problems that are plaguing us today,” Ryan told Beck. Progressives, Ryan added, “create a culture of dependency on the government, not on oneself.”
And just last week, the conservative Federalist website praised Princeton students for protesting Wilson. “Asking a private school to stop honoring an authoritarian hatemonger who also happened to be one of the most destructive presidents in the history of the United States is about the sanest thing I’ve heard happening on a college campus in a long time,” wrote senior editor David Harsanyi, in a rare right-wing tribute to the recent wave of campus demonstrations.
The Princeton students ended their sit-in after the university agreed to initiate a conversation about retaining Wilson’s name on its buildings. That’s exactly as it should be. But I hope the conversation includes a full reckoning with Wilson’s legacy, including his expansion of government regulations and services. His conservative antagonists certainly remember that. It would be a pity if liberals forgot it.
Read the entire piece here.
If you appreciate this content, please consider becoming a Patron of Current.