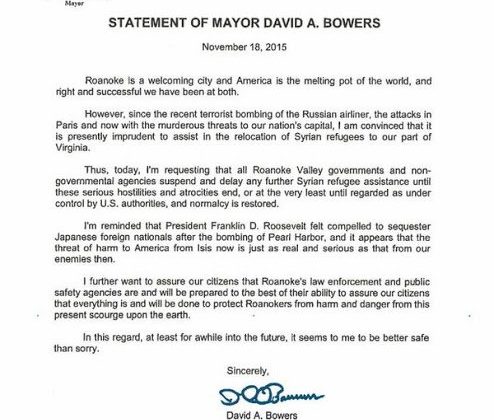 Here is what the mayor of Roanoke, Virginia said yesterday: 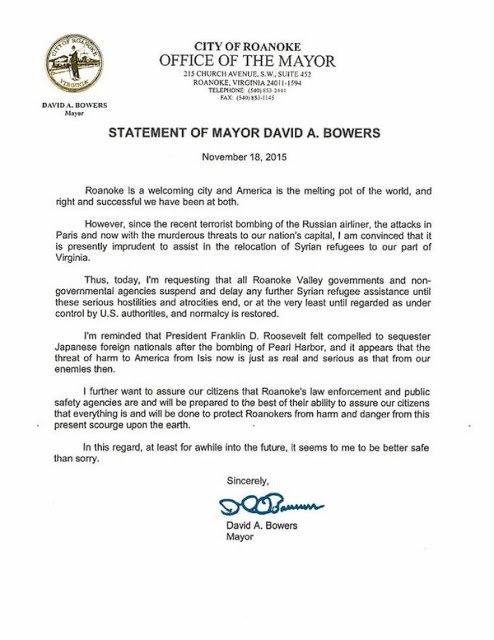 And here is Elizabeth Breunig at The New Republic:
A few points for Bowers’s consideration:
1.) It’s ISIS, not Isis, the Egyptian goddess of health, wisdom, family, and so forth.
2.) In 1988, President Ronald Reagan signed into law the Civil Liberties Act, which formally apologized to all survivors of Japanese Internment and offered survivors $20,000 each. Generally we do not formally apologize and offer reparations for decisions we reflect proudly upon.
3.) Internment did not exclusively affect “Japanese foreign nationals,” that is Japaneses citizens in the United States. Rather, it included 127,000 American citizens whose only crime was having Japanese ancestry.
4.) Authorities suppressed official intelligence reports that would have undermined the logic of internment, such as the Ringle Report, which found that only a tiny percentage of Japanese-Americans posed any threat to national security, most of whom were already known to authorities or were in custody.
5.) Fear makes us clumsy and dangerous.