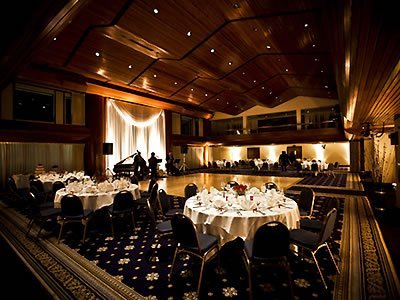 When I was out promoting Was America Founded as a Christian Nation?: A Historical Introduction I gave an invited talk to a group of secularists, skeptics, and Humanists from the Pittsburgh community of the Center for Inquiry.  The lecture took place at the Carnegie Science Center (a fitting location) on Pittsburgh’s North Shore, right next door to Heinz Field.

If I remember correctly the auditorium was crowded that night as hundreds of skeptics packed in to hear a history professor from Messiah College talk about whether or not the United States was founded as a Christian nation.  I didn’t know what to expect.  I am guessing they didn’t either.

About ten minutes into the lecture a gigantic screen began to lower behind me on the stage.  I had not planned to use any visuals during the talk and the event organizers knew this.  As the screen came down I paused, turned around and looked at it, and said something like “I have no idea why or how this screen is moving.  It must be a message from God.”  There was an awkward silence in the room for a split second, but it seemed like an eternity.  Then the room broke into uproarious laughter.  I breathed a sigh of relief that my attempt at humor actually worked.  The ice was broken and I continued with the lecture.

I look back fondly on that lecture. The leadership of the Center for Inquiry was very hospitable and gracious.  They took me out to dinner before the lecture and actually apologized before the food arrived because, as atheists, it was not their custom to pray before meals.  I tried to disabuse them of the idea that all Christians bow their heads and utter audible prayers before every meal they eat in a restaurant.

Several friends and acquaintances asked me why, as a Christian, I accepted the invitation to speak to this group.  My response was “why not?”  I am a historian. I wasn’t there to convince them that the claims of Christianity were true.  I was asked to speak about the relationship between religion and the founding.  Many of the folks I talked with that night wanted to be more informed about how they could or could not use the history of the founding to promote their views.  Some of them bristled when I talked about how many of the founders believed in God or were Christians.  Others nodded in agreement when I mentioned that many of the founders were skeptics and championed the idea of the separation of church and state.

The question and answer session following the lecture was phenomenal.  I left believing that I helped this group understand when they could appropriate the founders and when they could not.  I hope I got them to think historically.  Perhaps there will be another time to discuss the issues that divide us. If that day ever comes, our conversation will at least be built on a firmer historical foundation.

I thought about that speaking engagement yesterday when I read a post at TheHumanist.com by Matthew Bulger, the “legislative associate” for the American Humanist Association.

As I reported on this blog a few days ago, several Baylor University professors recently visited the National Press Club to talk about America’s “secularization myth.”  It was a pretty star-studded cast that included historian Thomas Kidd, sociologist Rodney Stark, and historian Philip Jenkins.  You can read about it here.

As might be expected, Bulger, after attending the event, was not convinced that the “secularization” thesis was a “myth.”  He was critical of all the presentations, but I was most struck by his critique of Kidd’s lecture titled “A Godless American Founding?”  Here is what Bulger wrote:

But perhaps the strangest and most desperate parts of the event focused on religion’s supposed benefits on personal health and the role religion should have in public life according to the founding fathers…
Just as strange as this tasteless health-based appeal for religious belief was Professor Thomas Kidd’s perspective on the founding fathers and secularism. While admitting that a large number of the founders were deists, religious skeptics, and secularists, Kidd also asserted that they supported a relatively robust role for religion in public life. But rather than reference documents supporting this position, Kidd instead focused on personal stories. Noting Jefferson’s strong belief in a “wall of separation,” Kidd also noted that Jefferson on occasion would attend religious services in the US Congress. Never mind the fact that all sessions of Congress are opened with prayer—or the fact that Jefferson as a delegate from Virginia to the US Congress would have already been present in the congressional chambers as part of his duties; to Kidd, this was definitive proof of Jefferson’s support for religious activities in government buildings.
The feeling I got from the event was that of open panic: panic about the declining role of religion in America and around the world, pa
nic about the rising tide of governmental secularism, and panic that the media was no longer a defender of religious ideas or institutions. The result of this panic, at least for many of the presenters, was the adoption of the “ostrich defense,” that of sticking one’s head in the sand and ignoring reality. If polls show religion is on the decline, the polls must be faulty or the media must be misinterpreting them. If the number of religiously unaffiliated is on the rise, this must be because religious people are simply leaving religious institutions while keeping their beliefs, not because more people are becoming atheistic or agnostic.
While it was a bit disappointing to see academics behave in such an unscholarly manner, the message that secularists and nontheists could take away from the event was comforting: religion may never go away completely, but at least for now it appears to be fading into the background of society and the human mind.
Strange? Desperate? Unscholary? Ostrich defense?
Bulger may not the like the intellectual critique of secularization propounded by these Baylor professors, but his response reveals a deeply anti-intellectual strain in the humanist/atheist camp.  (So I guess evangelicals are not the only ones who are experiencing a “scandal” in this area).
Let’s take his response to Thomas Kidd.  It sounds as if Kidd, according to Bulger’s post, did mention that many of the founders were skeptics.  He also noted, quite accurately, that the founders supported a role for religion in public life.  I was not at the talk, but I imagine that most of the “stories” Kidd told could easily be backed up with “reference documents.”  Does Bulger know that Kidd has written extensively on these topics in books with footnotes and documentation?  Did he do his homework before he reported on this event?
In its approach and argumentation (but certainly not in its content) Bulger’s post is no different from the stuff I read from David Barton.  Both prefer politics and ideology over history.
The spirit behind Bulger’s post was a far cry from the hospitality and conversation I experienced in Pittsburgh.
If you appreciate this content, please consider becoming a Patron of Current.