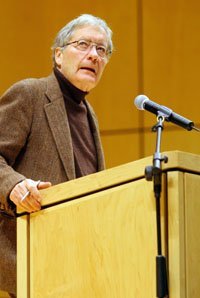 Some of you have been following the Ross Douthat vs. liberal Catholic theologians debate over who is the most qualified to write about the Catholic Church.  Check out our coverage here and here.

Recently Kenneth Woodward, the dean of religion journalism and the longtime religion writer at Newsweek, chided these progressive theologians for their elitism and their inability to articulate their position clearly.

Here is a taste of his piece at First Things:

…Because the flare-up touches on who is qualified to write about matters Catholic, I took interest. After all, I was no more qualified as Newsweek’s religion editor than is Douthat as a columnist for the Times: neither one of us has a degree in theology, which seems to be what the Catholic scholars are demanding. Or are they?
For me, it is the second of the letter’s four sentences that is troubling. This, the key accusatory sentence, is so bumbling in construction that any effort at exegesis has to take it in parts. Part one reads: “Aside from the fact that Mr. Douthat has no professional qualifications for writing on the subject…” What exactly is the subject he is not qualified to write about? He has has already published a very substantive journalistic book on Catholicism that has been generally well received by Catholics of various stripes. If the subject is Catholic sacramental marriage, he is a husband and a father, an experiential credential that some of his academic critics, being priests, do not. If nothing else, it gives him a personal stake in the outcome of the church’s deliberations.
It is hard not to conclude from the way this sentence begins that what the offended scholars mean by “professional qualifications” is a doctorate in theology or in some degree kindred to “the sacred sciences.” But neither did G. K. Chesterton, or C.S. Lewis, or Thomas Merton, I believe. What they did is read widely and write well. A doctorate is the one credential Douthat’s critics own that he does not. This smacks of the academic virus that Frank O’Malley, my old English professor at Notre Dame, identified as “PhDeism”—i.e. credential worship. It is the virus that, in another context, Christopher Lasch lamented as inciting “the tyranny of experts” and is akin to what led Kierkegaard to observe that “a roomful of experts is only a crowd.”
But then if a doctorate were required of journalists, there would be no writers, editors or columnists (save one) at the New York Times. Real journalists do not even get PhDs in journalism, thank God, just as real journalists do not drink bottled water.
The rest of this sentence reads thus: “…the problem with his article and other recent statements is his view of Catholicism as unapologetically subject to a politically partisan narrative that has very little to do with what Catholicism is.”
It is hard to know what this sentence is trying to say. Does it refer to Douthat’s political conservatism or his conservative Catholicism? If it means that he views the recent synod on the family as a contest between liberal and conservative factions—well that “narrative” unfortunately has governed what every reporter and pundit has employed this and every other discussion of Catholic issues and events since Vatican Council II. And it certainly applies to the polarity that Catholic theologians have themselves exhibited time and again when gathered in solemn assembly. Unfortunately. And it is the only way the New York Times can understand what is going on in the church.
If it is a fumbling way of saying that popes (especially Francis) are above “political” maneuvers like so many other bishops, tell it to Robert Mickens or, for that matter, Garry Wills, whose narratives are as “politically partisan” as that of Douthat. Why target Douthat, and for that matter, why post this complaint to the Times? Which brings me to the letter’s last sentence.
Read the rest here.