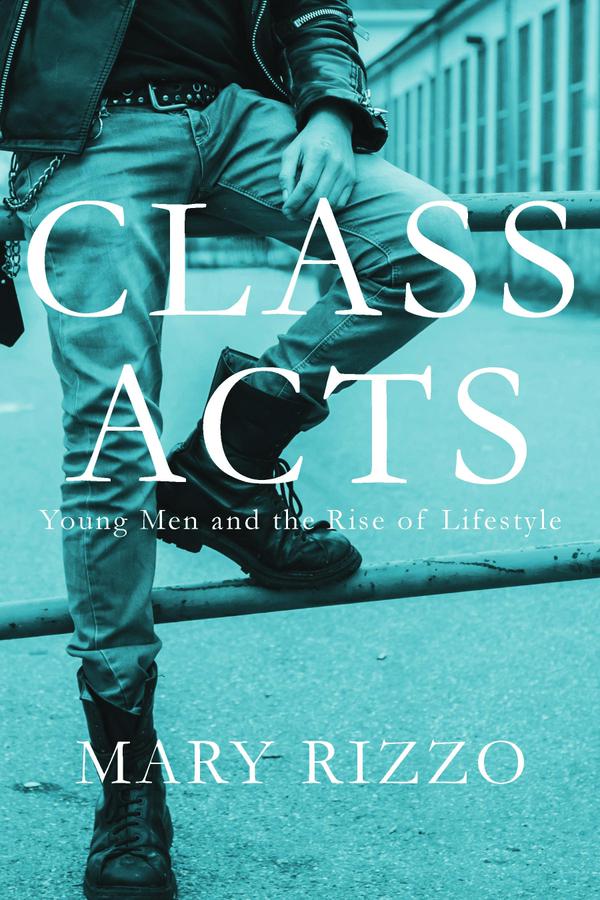 Mary Rizzo is Assistant Professor of Professional Practice and Associate Director of Public and Digital Humanities Initiatives for the Program in American Studies and the History Department at Rutgers University–Newark This interview is based on her new book, Class Acts: Young Men and the Rise of Lifestyle (University of Nevada Press, 2015).
JF: What led you to write Class Acts?
MR: I grew up in the 1990s, which was a time when a lot of really interesting subcultures, like skaters, riotgrrrl, and grunge, among others, flowered. It was also a moment when it seemed like no sooner then a subculture was formed than it was commodified by some giant corporation (we might call this Hot Topic-ification). What this meant was that the politics of authenticity was a constant topic of discussion among me and my friends, even if we didn’t know to call it that. When I got to grad school in American Studies at the University of Minnesota, I wanted to examine the prehistory of that 1990s moment, to understand how that process that I was observing had changed over time. I was also always interested in class identity, which is really under discussed in the US. By examining how young men tried to subvert their class background through style and how that became part of mass culture, I brought those two interests together.
JF: In 2 sentences, what is the argument of Class Acts?
MR: When young middle-class men in the 1950s and 1960s adopted working-class styles it was both an effort to be cool that traded on their class and race privilege and an attempt to critique how middle-class masculinity was defined in the Cold War era. By the late 1960s and the 1970s, though, the rise of lifestyle marketing commodified these class acts to define lifestyle as a chosen identity, disconnected from material circumstances.
JF: Why do we need to read Class Acts?
MR: After I sent my final manuscript off to the publisher, I was watching tv at the gym and a commercial came on for a household fragrance spray. The tag line was, “Smell like the lifestyle you deserve.” I only wish I had been able to get that in the book! The word lifestyle has become so ubiquitous in our culture that commercials like that one can use it and assume everyone understands what they’re saying. But when we dig a bit below the surface, it becomes clear that lifestyle has a slippery definition. I was amazed to find out that the word lifestyle was really pretty new, only becoming commonly used after the 1960s. So, I wanted to explore the ideological work that the concept does in different historical contexts.
As I show in Class Acts, lifestyle turns identities based in material realities into consumer goods that seem to be equally available to everyone. But they are not. Some people, like African Americans, become the source material out of which other people build their lifestyles. For the fashion industry, for example, black culture and black models have been used to represent an exotic “them,” rather than being part of “us.” Lifestyle is used in politics as well. I open and close the book with discussions of the 2008 and 2012 presidential campaigns. As another presidential campaign heats up—in which candidates who are wealthy and recipients of vast amounts of corporate money again will fight to be seen as just regular folks with lifestyles like the rest of us—we need to have some critical engagement with that term.
JF: When and why did you decide to become an American historian?
MR: I still get a thrill out of being called a historian! There are two main reasons I fell in love with history. The first is my mother. She grew up poor and only became middle class after marrying my father. Her stories about the New York City of the 1950s and 1960s were so different from the world I grew up in. When she told us about urban renewal displacing her family, or how women weren’t allowed to work enough hours to earn benefits at the grocery store she worked at, it made me want to understand why those things happened and how she—and by extension me—got from there to the Jersey burbs. Equally as important were the history teachers I had in high school and college. They were always the most engaging and, frankly, the wackiest, teachers I had. They made learning challenging but also fun. I remember one day in 10th grade history class we were going around the room telling our teacher what we wanted to write about for our final paper. I said Napoleon and, without missing a beat, he responded, “What do you have a complex?” That kind of joke, which treated us like adults, also assumed that we knew something already. Plus, I loved the content. History seemed to be about telling fascinating stories. I hope I’m doing those teachers justice with my own work.
JF: What is your next project?
MR: My next project looks at cultural representations of the city of Baltimore from 1954-early 21st century. For a city of its size, Baltimore has been represented over and over again, from the films of John Waters to The Wire (among many others). I’m fascinated by the interplay between cultural representation and cultural policy. How do the imaginary cities created by artists affect the real cities that we live in? How does public policy shape (intentionally or not), the kinds of cultural representations that artists create? What’s been amazing about working on this project is uncovering forgotten cultural texts, like Chicory, a poetry magazine that published work mainly by blacks living in Baltimore’s poorest neighborhoods from 1966-1983, and putting them alongside the more famous examples I use. It’s also been a thrill getting to talk to the people who made this art! I’ve interviewed theater directors, writers, actors, and editors so far.
JF: Thanks, Mary!