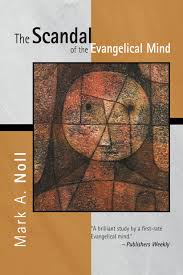 Tim Lacy, one of the catalysts behind the revival of American intellectual history in the United States, has finally had a chance to read The Scandal of the Evangelical Mind, Mark Noll’s love letter to his fellow evangelicals urging them to love God with their intellects.

Here is a taste of his recent post on the book at the U.S. Intellectual History blog:

Returning to Noll, one must keep in mind that he wrote this as a faculty member at Wheaton College—the “McManis Professor of Christian Thought,” in fact. Noll is now amember in the History Department at the University of Notre Dame, but the accusatory “scandal” in the book’s title did not result in a scandalous departure, or firing, from Wheaton. In 1994-95, he was an insider historical critic. A Publisher’s Weekly blurb on the cover of my paperback says: “A brilliant study by a first-rate Evangelical mind.”
After completing Noll’s book, and then picking up (again) Richard Hofstadter’s Anti-Intellectualism in American Life (AIAL), I’ve been surprised at how much both books agree on the Protestant roots of American anti-intellectual tendencies. Indeed, Noll prominently cites Hofstadter in the the former’s introduction. But Noll quotes from prominently from a Hofstadter footnote rather than the part of AIAL that directly correlates with Scandal. For instance, here’s the part of AIAL that goes to Noll’s concerns, as well as the concerns of many recent writers about the role of Christianity—particularly Protestantism—in America’s founding and thought life (e.g. Sehat, Fea, etc.). Here’s Hofstadter, in the opening chapter 3 (the first to directly address historical roots) directly addressing the root cause of all anti-intellectualism in American life (bolds mine):

The American mind was shaped in the mold of early modern Protestantism. Religion was the first arena for American intellectual life, and thus the first arena for an anti-intellectual impulse. Anything that seriously diminished the role of rationality and learning in early American religion would later diminish its role in secular culture. The feeling that ideas should above all be made to work, the disdain for doctrine and for refinements in ideas, the subordination of men of ideas to men of emotional power or manipulative skill are hardly innovations of the twentieth century; they are inheritances from American Protestantism.[3]

So much for separation of religion from the American founding, whether in terms of churches influencing the state or vice versa. It didn’t matter what happened in terms of material separation because a deep-seated Protestant mindset ruled all. The latter’s anti-intellectual sensibility determined what followed—only to be enhanced by subsequent theological, scientific, or philosophical innovations.
Even Noll’s book wasn’t this assertive. Noll limited his arguments to roots and effects in Protestant Evangelicalism alone. But there can be little question that Noll built his work on ground tilled and planted by Hofstadter. Noll just made Hofstadter’s work more palatable, and less scandalous to Protestant Evangelicals, because of the former’s insider status.