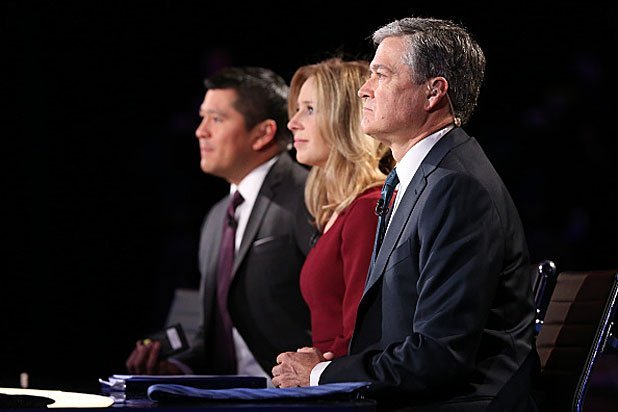 Every Republican in the country tonight is complaining about the liberal bias of the questions posed by Becky Quick, John Harwood, and Carlos Quintinilla, the moderators of last night’s GOP debate on CNBC.

Were they tough questions?  Yes. Were the moderators liberal?  I don’t know their personal political views. Did the questions have a liberal bias?  Probably, but I don’t think anything they asked was out of bounds as far as politics go–past or present.
I have not heard Donald Trump criticize the questions yet.  Sean Hannity interviewed him after the debate and Trump skirted Hannity’ question about the liberal-bias of the moderators.  Of course Trump also had serious problems with Megyn Kelly’s question in the first Fox debate.  He could be an bipartisan whiner.
Many conservative pundits on Fox, including Hannity, Charles Krauthammer, and Bill O’Reilly, all thought that Marco Rubio won the day when he said that the CNBC questions had a liberal bias.   Others praised Cruz for attacking the supposed liberal nature of the questions.
What struck me was that neither Cruz nor Rubio answered the question that they were asked. Instead they used their time to criticize the moderators.  The moderators asked Rubio a good question.  Why aren’t you showing up to represent the people of Florida in the Senate?  He did not answer this question, claiming that it played into the liberal bias of the media. Such an answer may have fired up his base, but it was not very satisfying.  And then he followed-up by saying that if John Kerry, John McCain, and others skipped votes when they were running for president, then why not me?  Jeb Bush was right to attack him on this point.
Let’s just say for the sake of argument that the questions at last night’s debate were biased.  I don’t know about you, but I want my presidential candidates to be able to give an honest answer to any legitimate question that is asked of them.  The President of the United States is the leader of all Americans–liberal and conservative.  When asked a hard question from someone of a different political or ideological perspective–a question that might make him or her uncomfortable–I don’t want my president to default with an appeal to the political bias of the question.
Fiorina needs to answer questions about her time at Hewlett-Packard.  I think GOP and independent voters would like to know more about this.   Marco Rubio needs to explain why he is not showing up for votes in the Senate.  GOP voters in Florida might be interested in this.  Ben Carson needs to defend his “tithing” approach to taxation when people like Becky Quick hit him with the numbers. These are all fair questions. And even if the media is liberal, its members are Americans who have every right to ask these kinds of questions of their candidates.
And by the way, I would say the same thing about the candidates on the Democratic side.  Why not have Fox News host a debate with Hillary, Bernie, and the gang. Let them address tough “conservative” questions on abortion and gay marriage and socialism and the role of government in society.  I would love to see that.
OK, enough of this rant.
I came away from the debate impressed with Kasich and Christie.