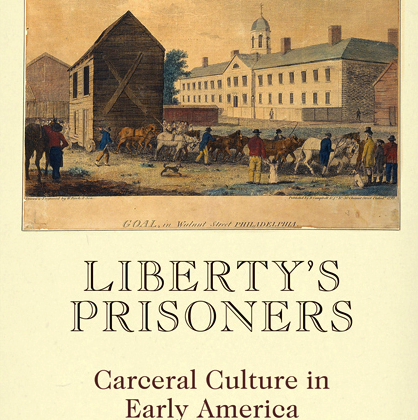 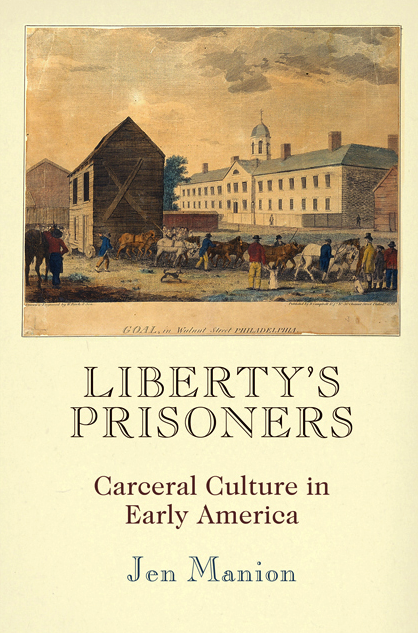 Jen Manion is Associate Professor of History at Connecticut College. The interview is based on her book Liberty’s Prisoners: Carceral Culture in Early America (University of Pennsylvania Press, 2015).

JF: What led you to write Liberty’s Prisoners?
JM: Liberty’s Prisoners is very much a “people’s history” of the origins of the prison system in America. I felt like it was such an important story that needed to be told from the bottom up, through the lives and perspectives of the most vulnerable people in Early American society: the poor, enslaved, immigrants, African Americans, and women. Mass incarceration is such a pressing social issue in the present but there is much for us to learn about how we got to this place.
JF: In 2 sentences, what is the argument of Liberty’s Prisoners?
JM: Liberty’s Prisoners argues that changing attitudes about work, freedom, property, and family shaped the creation of the penitentiary system in the United States, which was designed to reestablish order, both behind its walls and in society at large. Liberty’s Prisoners shows that those who were subject to surveillance and regulation were not blank canvases for social experimentation but rather played an active part in instigating, manipulating, and resisting these forces.
JF: Why do we need to read Liberty’s Prisoners?
JM: Liberty’s Prisoners paints a vivid picture of a dynamic moment in American society when slavery was being gradually abolished, a new national government was established, people were rising up and challenging social and political hierarchies like never before, and the penitentiary was born. It puts women in the heart of a story that is often told only through the perspective of men while analyzing how race, gender, and sexuality shaped punishment and freedom in sometimes unexpected ways. Most importantly, it is full of detail about the great public debates that took place two hundred years ago over the purpose of punishment in society, very similar to the debate that has gripped the nation the past few years.
JF: When and why did you decide to become an American historian?
JM: Studying history in college really helped me to make sense of the world around me, especially American race relations, polarizing social issues, and people whose experiences were very different from my own. As a historian, I like to dig up records about the lives of ordinary people who are generally neglected from history’s grand narratives. I want to understand how social change happens and how regular people respond to the restrictions and opportunities in their lives.
JF: What is your next project?
JM: My next project is called, “Born in the Wrong Time: Transgender Archives and the History of Possibility, 1770-1870.” It charts the lives of another group of people who have been largely neglected by history, those who crossed genders from female to male and lived as men for part or all of their lives. The primary source material is very rich and I hope the project will illuminate some longstanding questions about the role of sexual difference in society.
JF: Thanks, Jen!
If you appreciate this content, please consider becoming a Patron of Current.