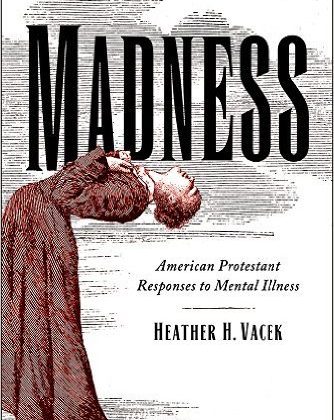 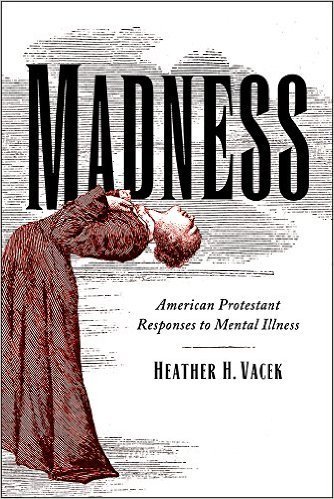 Heather H. Vacek is Assistant Professor of Church History at Pittsburgh Theological Seminary. This interview is based on her new book, Madness: American Protestant Responses to Mental Illness (Baylor University Press, 2015).
JF: What led you to write Madness?
HV: I’m curious about how religious beliefs shape practice, and in particular, how Christians respond—or fail to respond—to suffering. Working as a student chaplain at a state mental hospital a number of years ago, I realized Christian reactions to mental illness seemed more complicated than, for example, reactions to minor surgery or cancer treatment.
Early in my research about the history of Protestants and mental illness, I began to frame this reality with the question, “Who gets a casserole?” Thinking about typical modern congregations, it appeared individuals and families navigating cancer diagnoses were much more likely to receive support in the form of casseroles than those navigating acute or chronic mental illness. If Protestants profess to care for the well-being of bodies, minds, and souls, why did those living with mental illnesses often receive minimal attention? I found myself curious to know if the different reactions to mental and physical illnesses had always been the case, and so I set out to uncover Protestant responses throughout American history.
JF: In 2 sentences, what is the argument of Madness?
HV: From the colonial era to the twentieth century, two forces combined to inhibit American Protestants’ ability to fulfill their stated mission of caring for the whole person: 1) shifting professionalization sequestered clerical and lay Christian authority in the private, spiritual sphere, leaving healing—physical and mental—as the responsibility of secular medical professionals, and 2) the social stigma surrounding mental illness deepened, making churchgoers reluctant to engage sufferers lest they be tainted by association.  Both rising confidence in humankind’s ability to solve problems and the persistence of theological notions that connected mental maladies to sin deepened stigma and linked mental maladies with weakness and deviance, making Protestants reticent to respond.
JF: Why do we need to read Madness?
HV: It can be easy to assume that particular religious convictions generate an expected set of responses. While that is sometimes the case, Madness demonstrates how and why reality is much more complicated. This is a story of how external factors—shifting clerical authority, the rise of medicine, the interaction between religion and medicine, the emergence of state institutions, and social stigma—formed the reactions of religious people in the face of a particular sort of illness. The book’s exploration of Protestants and mental illness demonstrates what appeared—and failed to appear—on clerical and congregational agendas.  It also offers insight about how Christians engaged suffering, particularly seemingly intractable distress. Though largely a historical account, for those who are members of Christian communities, the final chapter thinks theologically and explores hospitality that might be extended in the face of the suffering and stigma that often accompany mental illness.
JF: When and why did you decide to become an American historian?
HV: I suspect I don’t fit the typical mold of how one enters the field of history. My work as a scholar of American religion is a second career. I first trained and worked as an engineer, employment that I loved and found invigorating. Then, after a decade in corporate America, I responded to a call to a different vocation and enrolled in seminary. Afterward, I entered a doctoral program in American Religious History. The object and purpose of my intellectual efforts shifted from the pursuit of corporate profit to exploring the past to shed light on the present. I found the skills I’d gained as an engineer—working to figure out how and why things work the way they do—translated nearly seamlessly into the work of a historian. The work of engineering and the work of history share common methods. In light of a central question, I pose a hypothesis, and then find, explore, and synthesize sources that will help prove or disprove that initial theory. I attend to the evidence, and finally, I hazard a claim about what that data reveals.
JF: What is your next project?
HV: The shape of my next project solidified during an interfaith prayer service following the tragic shootings at Mother Emanuel Church in Charleston, South Carolina in June of 2015. As I looked around a chapel filled to the brim with the laments of members of my city from a variety of faith traditions, I was acutely aware of how theological heritage, demographics, and life events shaped experiences of suffering and ways the human and divine intervention that followed were voiced. Participants lamented together, but from distinct vantage points. Even the Christians in the room brought different postures toward that specific horrific event and the suffering it caused.
Given my curiosity about responses to suffering, my next project will explore more deeply how context has shaped experiences of, and responses to, suffering. Among other factors, theological convictions, frameworks of belief, the source of suffering (war, illness, oppression, and other forms of evil), race, class, and gender play a role in how suffering is experienced and described.
The colonial clergyman Cotton Mather narrated suffering as an expected part of the Christian life. Centuries later the modern preacher Joel Osteen seemed to name suffering as a failure of faith. What have other Americans thought? What have they agreed about? Where and why have their reactions differed? What changed (or remained consistent) in the American political, social, and economic landscape between the eighteenth and twenty-first centuries to generate those differences? Some believers expected suffering. Others even sought suffering as a test of faith. Some Americans found their faith strengthened through distress, while others abandoned religion, finding God and radical suffering incompatible.
I’m early in the exploration of this new project, but anticipate that the racial context of the American landscape will figure prominently in the work. Between Mather and Osteen, thinkers including Sarah Osborn, Frederick Douglass, Harriett Beecher Stowe, James Baldwin, Dorothy Day, Reinhold Niebuhr, and others will populate the account of American Christian responses to suffering.
JF: Thanks, Heather!