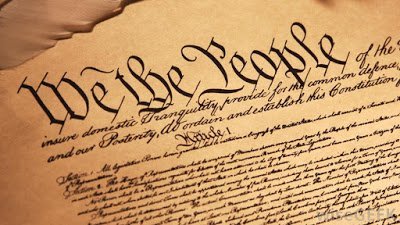 In his recent visit to Liberty University, Bernie Sanders said that the United States “in many ways was created, and I’m sorry to have to say this, from way back, on racist principles, that’s a fact.”

On Tuesday night in my online Gilder-Lehrman graduate course on colonial North America, I told my students that Sanders was correct. We spent the class studying colonial Virginia and discussed how the colony became a slave society near the end of the seventeenth century.  At the end of the lecture I took a cue from Edmund Morgan’s American Slavery, American Freedom and reminded my students about the ways the wealth generated by slavery in this tobacco colony enabled Virginia planters such as Thomas Jefferson, George Washington, and others to be in a position to articulate some of America’s greatest statements about liberty and freedom.  Irony indeed.

Then today I read Sean Wilentz’s New York Times op-ed “Constitutionally, Slavery Is No National Institution.”  (It appears to stem from his recent Constitution Day Lecture at Princeton). Here is a taste:

…the myth that the United States was founded on racial slavery persists, notably among scholars and activists on the left who are rightly angry at America’s racist past. The myth, ironically, has led advocates for social justice to reject Lincoln’s and Douglass’s view of the Constitution in favor of Calhoun’s. And now the myth threatens to poison the current presidential campaign. The United States, Bernie Sanders has charged, “in many ways was created, and I’m sorry to have to say this, from way back, on racist principles, that’s a fact.”

But as far as the nation’s founding is concerned, it is not a fact, as Lincoln and Douglass explained. It is one of the most destructive falsehoods in all of American history.

Yes, slavery was a powerful institution in 1787. Yes, most white Americans presumed African inferiority. And in 1787, proslavery delegates to the Constitutional Convention in Philadelphia fought to inscribe the principle of property in humans in the Constitution. But on this matter the slaveholders were crushed.

Read the entire piece to see how Wilentz supports his argument.  It is a rather odd piece. First, Wilentz seems to be responding to Sanders’s comments at Liberty, but Wilentz focuses specifically on the Constitution when Sanders’s remark seemed to be much more general in nature.  I think the Vermont senator meant to say, along with Morgan and others, that the roots of the United States are intricately bound with slavery and what today we call “racism.”

Second, even if we do limit Sanders’s comment about racism and the American founding to the United States Constitution, it very hard to say that racism and slavery were not a part of the creation of this founding document.

Several scholars and historians have already replied to Wilentz.  Here are four:

Lawrence Goldstone at The New Republic

Kevin Gannon at The Junto