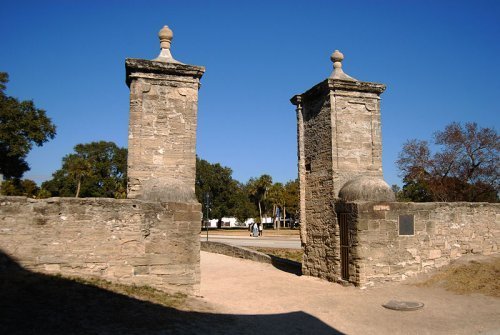 The oldest European-settled city in the United States celebrates its 450th birthday today. No, it is not Jamestown or Plymouth.  The honor belongs to St. Augustine, Florida.

Matt Blitz at SMITHSONIAN.COM tells us all about it.  Here is a taste:

On September 8, 1565, Spanish explorer Don Pedro Menendez de Aviles landed ashore at an inlet (later called Matanzas Inlet) on the eastern coast of today’s Florida. Planting the Spanish flag, he declared the harbor and surrounding land in the name of the Spanish Empire and began setting up a permanent settlement. He named it after St. Augustine, the patron saint of brewers. While other Spanish explorers came to the New World looking for “God, gold and glory,” this was not exactly the case for Menendez, historian Dr. J. Michael Francis told Smithsonian.com. “He hoped to link the Atlantic Seaboard with the Gulf of Mexico, the Pacific Ocean and New Spain, what later would become Mexico … He was really trying to establish a commercial empire in Florida,” explains Francis.

The history of Spanish explorers in Florida didn’t start with Menendez, of course. In 1513, Juan Ponce de León was the first recorded European to officially set eyes upon the peninsula. Despite the legend saying he “discovered” Florida while looking for the fountain of youth, historians now agree that Ponce de León travelled due to his own political aspirations.
Organizers hope September’s 450th anniversary celebrations will bring more attention to a city that doesn’t always enjoy the same fame as other early settlements. “One of the challenges that St. Augustine faces, and Florida history in general, is that the narrative of U.S. history typically begins with the English story of Jamestown and the pilgrims … the reality is that the Spaniards predated all of that and were attempting to creating establishments all the way back in 1513,” says Francis.
Of course Native American cities predate St. Augustine.  For example, Cahokia dates back to the 7th century CE.