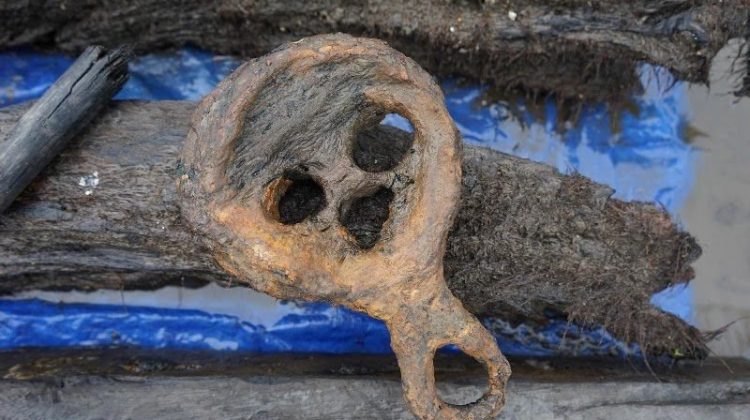 I can’t resist these kinds of stories.

Recently a Maryland road crew working to repair the bridge that crosses the Nanticoke River on Route 50 discovered the remains of an eighteenth-century ship.  It is unclear why the ship sunk to the bottom of the river.  It was either poorly constructed or shot down in a skirmish during the Revolutionary War.
Here is a taste of the report from Julie Zauzmer of The Washington Post:
The archaeologists speculate that the ship was built at a small local facility, not a major shipyard, because they can see some elementary mistakes in construction. An extra hole drilled in a log, a missing fastener that should have tightened the keel — those details are telling, centuries later.
Most evocative of all are the logs themselves. Scientists can date and locate trees with remarkable precision. The pattern in the rings of the oaks that became the ship tell archaeologists precisely when and where they were chopped down: 1743, somewhere in Maryland between the Potomac River and Annapolis.
“I was shocked that we could get that sort of detail,” Schablitsky said.
That means the ship was built sometime after 1743, probably soon after. And Schablitsky said it is clear that it went down before 1800.
It may have been purposely scuttled by because it was no longer seaworthy. But it may have met a more dramatic end.
Documents from the time tell of a Revolutionary War skirmish in the town of Vienna, Md. — where the wreck was found — in which British sympathizers shelled the town and sank several boats owned by colonists who supported the Revolution.
Intriguingly, the logs from the wreck were scorched, as if they had been burned just before sinking.
If you appreciate this content, please consider becoming a Patron of Current.