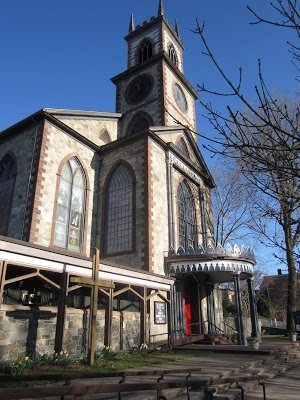 According to this New York Times article, over half of the slavery voyages from the United States left from Rhode Island ports.  Most of those Rhode Island slave traders were Episcopalians (Anglicans). Katherine Seelye describes what today’s Rhode Island Episcopalians are doing about it.  It is a great story about an attempt to merge historical understanding with racial reconciliation.  Here is a taste:

Over the last decade, the Episcopal Church of the United States has formally acknowledged and apologized for its complicity in perpetuating slavery.Some Episcopal dioceses have been re-examining their role, holding services of repentance and starting programs of truth and reconciliation.

The Diocese of Rhode Island, like many others, has been slow to respond. But under Bishop W. Nicholas Knisely, who became the Episcopal bishop of Rhode Island in 2012, it is taking steps to publicly acknowledge its past. They include the establishment of a museum focused on the trans-Atlantic slave trade, slavery and the North’s complicity, as part of a new center for racial reconciliation and healing.

“I want to tell the story,” Bishop Knisely said, “of how the Episcopal Church and religious voices participated in supporting the institution of slavery and how they worked to abolish it. It’s a mixed bag.”

Other slavery museums — notably the Whitney Plantation in Wallace, La., and the Old Slave Mart Museum in Charleston, S.C. — tell the story of slavery in the South. Some museums and historic sites touch on slavery in the North. But no museum is devoted to the region’s deep involvement, according to James DeWolf Perry VI, a direct descendant of the most prolific slave-trading family in the United States’ early years and a co-editor of a book called “Interpreting Slavery at Museums and Historic Sites.”

He is helping to plan the museum and reconciliation center, which are still in the organizing and fund-raising phases. They are to be housed at the 200-year-old stone Cathedral of St. John, the seat of the Episcopal Diocese of Rhode Island. Because of dwindling membership, the majestic but deteriorating cathedral was closed in 2012.