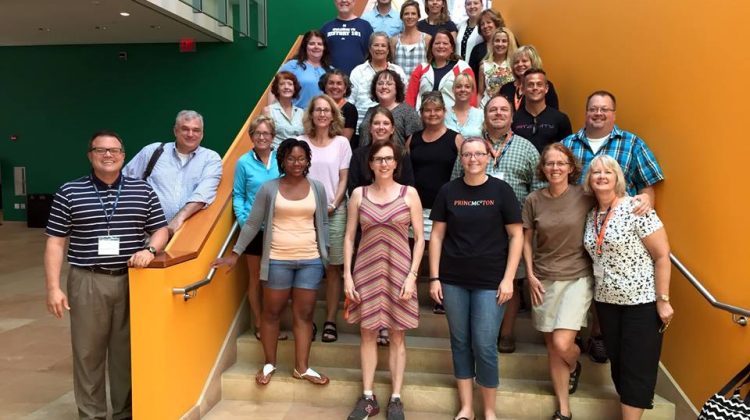 The Gilder-Lehrman Institute for American History Summer Seminar on the “13 Colonies” has come to a close.  It was a great week at Princeton University.

The morning began with a lecture on Native Americans.  I introduced the teachers to some of the metaphors used by historians to explain Indian life in the North America at the time of English colonization.  We discussed the “Middle Ground” (Richard White), “Facing East” (Dan Richter), and the “Indian’s New World” (James Merrell).

The second lecture of the morning focused on the First Great Awakening in British America.  We spent some time discussing George Whitefield, Jonathan Edwards, the difference between Old Sides and New Sides, some basic interpretations of the Awakening, and the revival’s impact on colonial education.

After lunch, and before I turned the class over to Nate McAlister, we talked about the Britishness of the colonies.  My goal was to try to get the teachers to see that the colonists were becoming more and more British (as opposed to “American”) as the colonial period unfolded, culminating in the British nationalism that pervaded the colonies in the wake of the French and Indian War.  In the process we discussed the dangers of the “Whig” interpretation of history and the importance of teaching students–even K-8 students–how to think like historians.

Later in the afternoon the teachers presented the lesson plans that they had been working on all week.

I always leave these seminars energized.  Sometimes I prefer to hang around with teachers than with my fellow colleagues in the historical profession.  When academic historians gather together informally the meetings can sometimes devolve into posturing, gossip, and complaining about teaching loads, college administrators and colleagues.  When K-8 teachers get together they talk about the past, history, and teaching history.  It is refreshing.

This year we had a great group of teachers and it was fun getting to know them.  I hope that Jami, Dave, Teresa, Brittany, Courtney, Susan, Carol, Carol, Elisa, Jim, Mallory, Christine, Susan, and the fifteen other teachers who came to Princeton this week were able to take something home with them that will make them better educators.

And to Nate McAlister:  Let’s do it again next year!