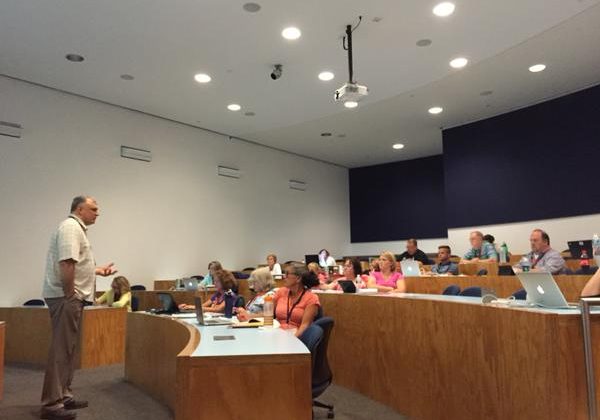 We have made it through Day Two of the Gilder-Lehrman Institute of American History Summer Seminar on the “13 Colonies” at Princeton University.  It was a long day, but the twenty-seven K-8 teachers here this week are still going strong.  This group has a lot of energy and they seem to be really engaged.

Today I gave a lecture on the founding of Massachusetts Bay colony, the role of women in colonial New England, and the founding of Pennsylvania.  In the afternoon Nate McAlister worked with the teachers as they developed their lesson plans.

After dinner we took a tour of colonial Princeton led by guides from the Historical Society of Princeton.  Richard Moody led some of us on a wonderful tour of Princeton University.  Richard took us to Nassau Hall, Nassau Presbyterian Church, the university chapel, the president’s house, and a host of other places on campus.  Richard knows how to end a tour.  The last stop was the Tap Room at the Nassau Inn.

﻿﻿Tomorrow we are heading to Philadelphia where we will be getting a tour from George Boudreau, author of Independence: A Guide to Historic Philadelphia.