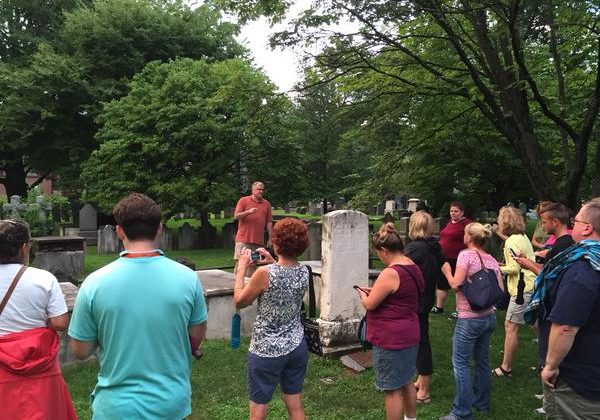 Day One of the Gilder-Lehrman Summer Seminar on the “13 Colonies” at Princeton University is in the books.

Actually, we began on Sunday night with a great buffet dinner.  After the feast we wandered around the Princeton campus and got ourselves oriented. We paused for a moment at the John Witherspoon statue and then I spent a little time talking about the colonial and revolutionary history of Nassau Hall.  (The students are very familiar with 18th-century Princeton from reading my The Way of Improvement Leads Home: Philip Vickers Fithian and the Rural Enlightenment in Early America).

The second and third sessions focused on the colonial Chesapeake.  We discussed mercantilism, the “Jamestown deathtrap,” tobacco, indentured servanthood, Bacon’s Rebellion, and slavery.

My partner in crime this week is Nate McAlister, a middle school teacher in Kansas and the 2010 Gilder-Lehrman National Teacher of the Year.  Nate spent the afternoon with the teachers and helped them with their lessons plans.  (Each participant must produce a lesson plan based on a primary source and it is due at the end of the week).  I can’t imagine doing this seminar without Nate.  He is an outstanding coordinator.

After dinner in a Princeton dining hall we headed to the Nassau Presbyterian Church Cemetery.  It was such a pleasure and honor to talk about Jonathan Edwards, Aaron Burr Sr., Aaron Burr Jr., Samuel Davies, Samuel Finley, and John Witherspoon as we all stood over their gravestones.  After a very short lecture at these gravestones the teachers all went their separate ways in the cemetery.  I wandered around a bit and found the gravestones of Grover Cleveland, B.B. Warfield, and Varnum Lansing Collins.

It was a long day that ended in the Tap Room at the Nassau Inn and a great conversation with Nate and a couple of teachers that covered everything from the Gettysburg Address to environmental history and the First Amendment to Good News for Modern Man.