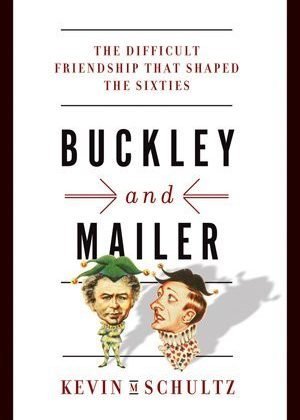 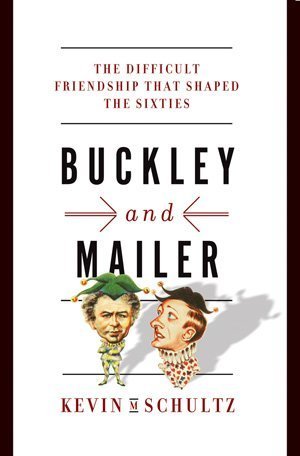 Kevin Schultz is Associate Professor of History, Catholic Studies, and Religious Studies and Associate Chair of the Department of History at the University of Illinois-Chicago.  This interview is based on his latest book Buckley and Mailer: The Difficult Friendship That Shaped the 1960s (W.W. Norton, 2015).
JF: What led you to write Buckley and Mailer?
KS: The 1960s have become this almost-mythologized time in American history, when American culture moved to the left, American politics to the right, and new roles were envisioned for men, women, African Americans, and, well, nearly everyone.  But there is so little out that that helps us understand it all.  Why did so much happen so quickly, and so violently?  With that question in mind, a few years ago I stumbled across some letters of the left-wing novelist Norman Mailer.  One was a beautiful back-and-forth between Mailer and the right-wing firebrand William F. Buckley, Jr.  The letters showed obvious intimacy, but also rivaling visions for how America should move forward in order to allow maximum freedom for the individual.  A light bulb went on in my head.  Through the friendship of Buckley the conservative and Mailer the radical, I could tell an important story about the 1960s, about how the right and the left both attacked the liberal center with their varying demands for increased freedom, and how that battle led to what Mailer called the violent “birthing pangs of a new order.”  This book was my attempt to explain why the 1960s happened in the way that they did.
JF: In 2 sentences, what is the argument of Buckley and Mailer?
KS: That the best way to understand the 1960s is by seeing it as a period when one set of assumptions that most American shared was replaced by another, and that this happened because both the left and the right were unhappy with the culture that developed in the aftermath of World War II, thinking it denied Americans too many freedoms.  With such colorful characters like Buckley and his demands for laissez faire economics and respect for Christian tradition, and Mailer with his demands for a less repressive culture, I get to tell the story of this profound change through dozens of raucous stories, which include boxing matches, public debates, antiwar rallies, and Truman Capote’s Black and White Ball.
JF: Why do we need to read Buckley and Mailer?
KS: Not only to better understand why the 1960s unfolded the way they did, but also to learn how two guys with nearly opposite political outlooks became friends and enduring debating partners, something sorely missing today.  The secret was that they both emphasized their love of America and understood the other as doing the same (just, to their mind, completely incorrectly).  Finally, it’s useful to recognize how today’s politics have developed from the ashes of the 1960s, with Buckley’s quest to honor “the great Western tradition” still a powerful demand of Republicans, and Mailer’s yearnings for increased individual freedoms a calling of the left.
JF: When and why did you decide to become an American historian?
KS: Some time in my middle teens I realized that the context in which we’re raised and in which we live determines so much about how we look at the world.  I wanted to understand the ideas that dominated our thinking but which we barely knew were there, the water we swim in. The answer always led me to history.  The ideas that dominate our lives emerged out of older debates about which ideas should dominate our lives.  And this became the way I understood the world–in order to feel I understand something, I needed to know the context in which it became that way.  I think this kind of historical thinking is true for lots of people, I’m just lucky I get to make my living at it!
JF: What is your next project?
KS: Good question.  I have two books in mind, one that keeps me in the 1960s and one that moves me to the 1970s.  The 1960s book will likely be about another major figure, one who is a minor but important player in Buckley and Mailer but whose ideas captivated me the more I learned about them.  The 1970s book will be about the intellectual requirements of economic inequality, although I’m not sure how that book will develop.  Either way, they will be narratives, as I learned that I absolutely love to tell stories.
JF: Thanks, Kevin.  Look forward to reading it!