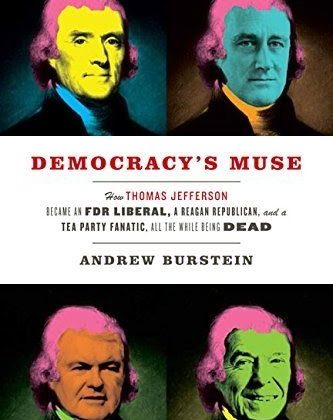 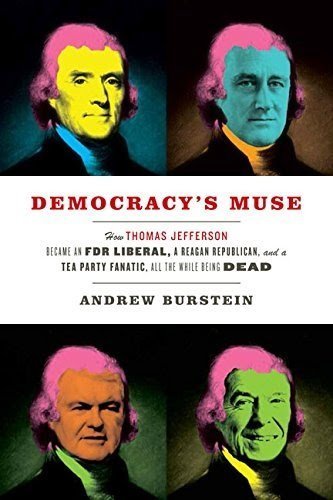 Andrew Burstein is Charles Phelps Manship Professor at Louisiana State University. This interview is based on his new book, Democracy’s Muse: How Thomas Jefferson Became an FDR Liberal, a Reagan Republican, and a Tea Party Fanatic, All the While Being Dead (University of Virginia Press, April 2015).

JF: What led you to write Democracy’s Muse?

AB: The seed of the idea for this book was planted some years ago when I saw, in Washington, President Kennedy’s notes from which he adlibbed remarks to a 1962 gathering of forty-nine Nobel laureates at the White House: “I think this is the most extraordinary collection of talent, of human knowledge . . . ever gathered at the White House, with the possible exception of when Thomas Jefferson dined alone.” I began, then, to keep track of the partisan politicians who have professed that Thomas Jefferson, if he were alive today, would mirror their views.

JF: In two sentences, what is the argument of Democracy’s Muse?

AB: The emotive founder was the first, but by no means the last, to designate his nation as “the world’s best hope.” This book charts, in their often colorful and at times desperate language, the strong statements of presidents, congressmen, and public intellectuals, from FDR’s time to Obama’s, as they have struggled to define what the “Jeffersonian ideal” means to modern America.

JF: Why do we need to read Democracy’s Muse​​?

AB: Jefferson’s political sentiments have reverberated across time and space in enchanting ways. Mikhail Gorbachev said that he frequently turned to Jefferson when he was fashioning reform of the Soviet system. At present, Jefferson remains a flashpoint in national conversations about the inherently secular or religious character of the American republic. And then there’s his sex life. Democracy’s Muse is as concerned with popular culture as with the pathos and pathology of the present partisan environment—the book ultimately weighs in on what we can and cannot know about the historical Jefferson, and why that question matters.

AB: My path was more circuitous than that of most historians in that I majored in Chinese history and politics in college. I spent more than a decade doing business in China and Japan. I was nearly forty when I returned to academia, exchanging the study of Maoist political culture for that of early America. The only shared element I can think of in reflecting on my bifurcated historical travels is a fascination with the revelatory nature of language. Chinese ideographs explain a great deal about Chinese perspectives; from that study, I developed an interest in, and sensitivity to, the desirable goal of teasing greater meaning out of early American texts.

AB: I co-authored the book Madison and Jefferson (Random House, 2010) with my partner, Professor Nancy Isenberg. We plan to collaborate on another book—another political pairing out of America’s past.

JF: Good stuff, thanks Andrew!
And thanks to Megan Piette for facilitating this installment of The Author’s Corner