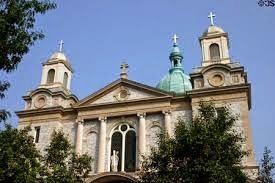 Some of you who read this blog carefully and have a good memory will recall that in Spring 2014 I developed a course on Pennsylvania history.

The course serves several student constituencies at Messiah College.  First, it counts as an upper-division history course for Messiah history majors. Second, it counts as an elective in our public history program.  We are not only using this course to teach content (Lenape Indians to Three Mile Island and beyond), but our students also gain basic training in how to do oral history, local history, and even a very small amount of digital history. Third, this course counts as a general education course that meets Messiah’s “pluralism” requirement. As a result we spend a lot of time discussing questions of religious, ethnic, class, and racial identity as it relates to events that happened in the history of the state.  I challenge the students to ask whether or not William Penn’s so-called “Holy Experiment” has been a success.

Once again, I have decided to use Randall Miller and Bill Pencak’s book Pennsylvania: A History of the Commonwealth.  I like this book because it offers chronological coverage of Pennsylvania’s past alongside chapters related to the skills and practices–oral history, folklore, genealogy, etc.–of doing Pennsylvania history.

Last year students had two major assignments.  First, they had to visit local archives and create an online exhibit using Omeka software.  Second, they had to conduct an oral history interview, transcribe the interview, and write an eight-page paper placing the subject of the interview in a larger historical context.

This year I have kept the oral history assignment.  Students are writing oral history papers based on interviews with longtime employees of the Pennsylvania Turnpike, people who lived through Three Mile Island, steelworkers who suffered through de-industrialization, and those who experienced the Pennsylvania home front during World War II, to name a few of the topics.

I have replaced the Omeka assignment with two smaller projects related to the work of our ongoing Digital Harrisburg Initiative.  First, students will be doing research that will eventually lead to the mapping of the Harrisburg Presbyterian community in 1900.  They are using church membership lists from Harrisburg’s historic Market Street Presbyterian Church and comparing the names and addresses with the 1900 census that David Pettegrew and his team of students have digitized.  Since the 1900 census has been mapped on a 1900 fire insurance map, it will be easy to develop the map further to include the location of Presbyterians.  This assignment is due next week, giving David’s team plenty of time to create the Presbyterian map in preparation for our analysis in class next month.

Second, we will be exploring the history of Catholics in Harrisburg in the years between 1900 and 1910.  Each student is assigned a 6-9 month section of the Harrisburg Daily Independent and the Harrisburg Telegraph.  Using Newspapers.com, they will find every article related to Catholicism in the city and write a five-page history of Catholicism in Harrisburg for their assigned 6-9 month period.  We will then spend several 90-minute class periods discussing these reports and piecing together the history of Harrisburg in this particular decade.  We are especially interested in the building of the Cathedral of St. Patrick’s on State Street.

Stay tuned:  I hope to do some posts on how these projects are progressing.