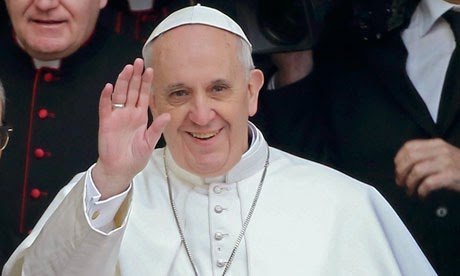 Conservatives are not happy with Pope Francis. They are saying that he should not be making “political” statements.”  I am not a Catholic theologian or an expert on Catholic social teaching, but isn’t Francis just being a consistent Catholic?  Somebody help me out here.

Moreover, since when has Church teaching ever been separated from politics?  Over at the New Republic, Elizabeth Stoker Bruenig explains:

After an initial wave of adulation, Pope Francis is now suffering a backlash. Granted, all popes suffer their critics for various decisions about liturgy and doctrine, but Pope Francis seems to have ignited a firestorm among Catholics due to his habit of addressing political matters. Rightwing disdain for Francis is deep enough to have some conservatives strategizing on how to continue to combat his influence without delivering possible gains to Democrats or so-called liberal Catholics.

Writing at The Week, Michael Brendan Dougherty hoped for “a truly humble papacy, where politics is avoided, and where the personality of the occupant does not presage some reform”—that is, a papacy the world has scarcely known. For years, papal encyclicals have included politics, from Rerum Novarum’s 1891 treatment of capital and labor to Quadregesimo Anno’s 1931 look at socialism and capitalism. More recently, Saint Pope John Paul II was said to have had a hand in the defeat of communism, thanks to, in the words of Washington Post columnist Anne Applebaum, “his unusual ability—derived from charisma and celebrity as well as faith—to get people out on the streets.” It should come as no surprise that Pope John Paul II’s political legacy is heeded at conservative Catholic outfits like First Things as a positive one, and that his tendency to involve himself in political affairs via craft and charisma (such as the Bosnian War) was not regarded by the anti-Francis crowd with the same distaste.

In any analysis of a public figure, partisan interests will influence one’s opinion, and there isn’t anything particularly productive about pointing out that conservatives tend to forgive in conservative leaders what they don’t in liberals. A more helpful question is this: Why has Pope Francis addressed political issues, such as climate change, inequality, poverty, and overpopulation? Is it evidence of abject partisan interest, or a covert dedication to communism, Marxism, or some other insidious ideology?

Or is it just that we now presume that “politics” belongs outside the Church’s purview—despite the Church’s historical record of considering and intervening in political affairs? To me, this appears to be the distortion at hand.

This is partly because the notion that “politics” can be neatly separated from daily life is a new one. For earlier political theorists, like Aristotle and Augustine, politics was just a natural extension of community life. But over time, a fantasy of “politics” wholly divorced from everyday life and experience has emerged in certain corners of liberal thought, producing with it the expectation that politics is a matter for professional politicians and their colleagues, while those in religious offices should simply avoid addressing politics altogether.

Yet, even if Pope Francis attempted to avoid politics, he would still run into trouble: This is because while “politics” has been increasingly cordoned off into a hermetically sealed chamber of thought in recent centuries, its purview has also been expanding so that it has absorbed new issues over time.