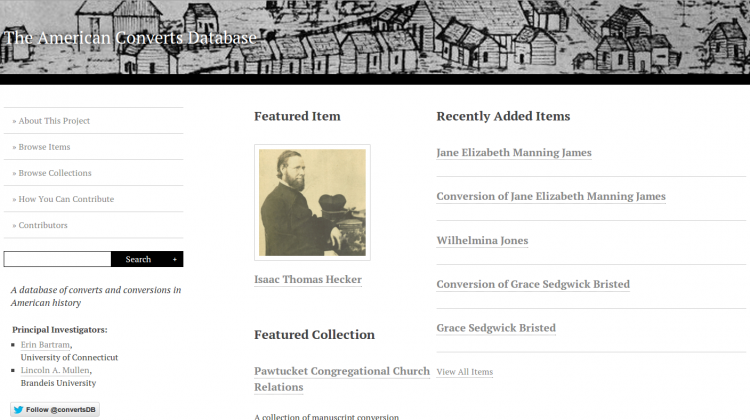 Here is Erin’s final post from AHA 2015:–JF
Now that I’m home and sifting through the pile of handouts, pamphlets, and business cards I picked up over the last few days, it’s time to write my final dispatch from AHA.
The morning began with my own panel, “American Religion Online: How Digital Projects Can Change How We Teach, Research, and InterpretReligious History.” I was presenting alongside Kyle Roberts and Chris Cantwell, with comment by the illustrious John Fea himself. I have to say, it was an absolute pleasure listening to Roberts and Cantwell talk about their projects. Roberts presented both the Jesuit Libraries Project, a recreation of the late 19th century library of St. Ignatius College, and the Jesuit Libraries Provenance Project, which explores ownership markings and annotations in the books that remain from that original library and makes them available on Flickr.  Cantwell’s Faith in the City: Religion and Urban Life in Chicago, 1870-1920 is a sprawling project mapping the religious geography of the city at the turn of the century, complete with digitized sources.  Portions of the project are still in the building phase, but Cantwell let us preview some of the maps, and the whole thing was pretty spectacular. Both Roberts and Cantwell echoed a sentiment that I’d heard a lot in the Digital Pedagogy Lightning Round the day before, which was later reiterated by John in his comments: let your students dig in and build these projects with you.
After the panel, I headed downstairs to check out the first poster session. I saw a lot of great projects, but I’ll just mention a few. One of the most interesting things I saw the poster and Prezi for “Spreading the Light in New York: 1880-1882,” by Rob Allen of Auckland University of Technology. He had this Prezi (set up on a touch screen, something I’d never really seen before). His argument about radical ideas moving through informal networks of friends as opposed to simply moving through unions, clubs, and other organizations resonated with my own work. You can view the Prezi or read more about the project here.
Next, I talked with Damayanthie Eluwawalage of University of Wisconsin-Stout about her project on penal attire in the 18th-century British Empire. In particular, she focuses on how prisoner uniforms were designed to divide and humiliate prisoners through the use of color and stamped slogans and emblems. She had a photo of one of the only surviving copies of a specific parti-colored uniform which I remarked looked very silly, almost like a harlequin costume. She said that was reserved for the worst criminals.
Working my way down the line, I was immediately drawn to a really well–designed poster by Katie Lambright, a graduate student at Minnesota. In her project “Cleanliness, Clutter, and Working Women: Fashioning Gender and Class in Sitcom Set Design,” Lambert examines the “choreographed clutter” of three sitcoms – Roseanne, Murphy Brown, and The Cosby Show – in order to think about the arguments made in the 1980s about domestic spaces, class, gender, and personal responsibility. She points out that Roseanne and  Murphy Brown might be different in many ways, but both come home to cluttered houses of one variety or another, while Claire Huxtable “has it all,” with a family, financial security, and a neat and tidy house.
Finally, I visited Sarah Purcell and had a grand chat about that perpetual bridesmaid Henry Clay, whose coffin and funeral procession were the subject of her poster. I encourage you to read her full article on the subject, as she does a marvelous job using Clay’s death to examine many facets of a particular moment in the antebellum period.
After that, I grabbed a quick lunch with a friend of mine from Northeastern and was off to the train station. It sounds like I missed some good stuff in the afternoon, but all of the twitterstorians helped me feel like I was still there. If it’s possible to feel intellectually drained and energized at the same time, that’s where I am right now, but I’m looking forward to letting what I’ve absorbed over the past few days shape my research and teaching in the coming weeks and months.