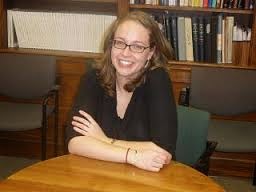 Erin Bartram is back.  As some of you read this, Erin will be presenting at American Society of Church History session “American Religion Online: How Digital Projects Can Change How We Teach, Research, and Interpret Religious History.”  I am looking forward to chairing and commenting. Here is her latest AHA post.  I can’t believe she got a lanyard! –JF
My day began not-so-bright but definitely early at the Women in Theology and Church History breakfast. It was such a treat, but also such a shame that it was so short and I didn’t get to meet many of the people whose projects were so interesting to me.  I was fortunate enough to meet up with some of the graduate students from the breakfast at the ASCH reception in the evening. Perhaps the most important development at the breakfast – I got a lanyard from ASCH Executive Secretary Keith Francis!
My first panel of the day was “Doing More with Less:The Promise and Pitfalls of Short-Form Scholarship in the Digital HistoryAge.” Kathy Nasstrom talked about the Oral History Review’s foray into short-form articles which you can read more about here. She said most of the submissions so far had come from traditional university-based scholars but that she hoped to see more from alternative kinds of scholars. Ben Railton spoke about blogging, tweeting, and writing pieces for websites like Talking Points Memo. One of his main points, echoed by the others on the panel, was that blogging is very generative, but that there’s no built in audience (except your parents) so you have to find a way to connect to your desired audience. Stephanie Westcott spoke about the overabundance of knowledge being created by scholars in an online form, and offered two ways to help us manage that deluge. The PressForward plugin helps scholars stay up to date on a given topic by aggregating blog posts of interest, and Digital Humanities Now curates and promotes new and interesting DH projects.
Finally, Kristin Purdy of Palgrave Macmillan talked about the Pivot series, which publishes works longer than an article but shorter than a monograph. Of the many benefits to this series, most interesting to me was something all of the panelists extolled as a virtue of short-form scholarship: the relative speed with which material can get to its audience and make an impact. Purdy said that while monographs spend months in the editorial process, Pivot books can make it to press in nine weeks. She cited the example of Peter Conn’s book Adoption: A Social and Cultural History, which was cited one month after its publication in an amicus brief submitted to the Supreme Court in the Proposition 8 case. The potential of all of these new forms was palpable in the discussion, but the comments did return several times to that perpetual question whenever innovation in form is considered: “How will this count towards tenure?”
On I went to the Digital Pedagogy Lightning Round, where nearly two dozen of us took two minutes each to pitch or explain a way to use digital methods in teaching. The ideas came fast and furious and I gave up taking notes, but I urge you to read the #s95 hashtag to see all of the amazing things presented. The main thing that struck me, however, was that all of this technology was being used to help teachers help their students as people, not just learners, whether by empowering students to create history in new and interesting ways or helping professors streamline assessment to leave them with more time to focus on the meaningful connections that can drive learning and keep students engaged and enrolled. I pitched my own project, and hopefully after a few conversations tomorrow, I’ll have something to share in my next update. One major benefit to a DH session like this? You pick up a dozen newTwitter followers in a couple of hours!
I had planned on choosing from one of several panels in the afternoon but when it came down to it, coming back to my hotel room and resting my brain a little bit won out. Thankfully, with John tweeting the public intellectuals panel, I felt like I didn’t miss a thing. Feeling a bit more refreshed a few hours later, I wandered over to the book exhibit, made a list of a million books I want to read, and tried to avoid the throngs of scholars clutching their complimentary wine and cheese. I didn’t buy anything, but I’m not sure I’ll be able to hold out tomorrow.
Tonight, all that’s left is to pack up and prepare for my presentation tomorrow morning: “The American Converts Database: TheDatabase as an Expression of Scholarship on Religious History.” For anyone who might be coming to the panel tomorrow morning on American religion online, feel free to take a look at the database beforehand. (http://americanconverts.org/)