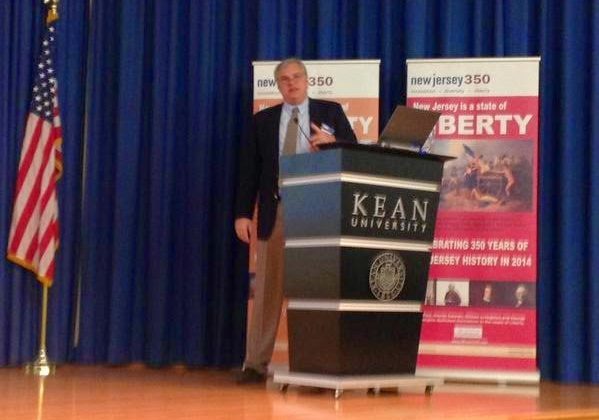 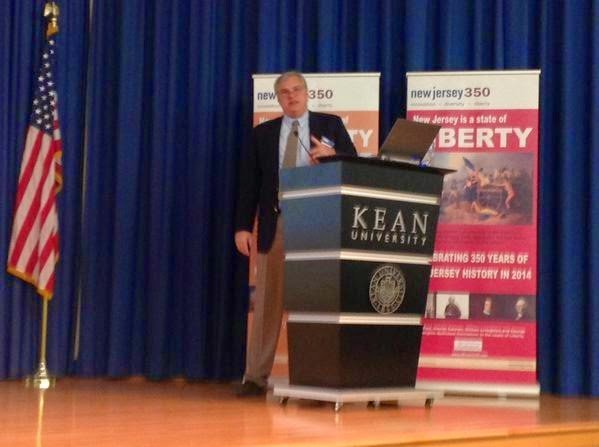 Last Saturday I had the honor of presenting one of the keynote addresses at the New Jersey Forum, a biennial conference on New Jersey history organized by the New Jersey Historical Commission. This year the conference was hosted and co-sponsored by Kean University in Union as a celebration of New Jersey’s 350th anniversary.

My lecture was titled “New Jersey’s Presbyterian Rebellion.”  It focused on some of my research on Presbyterians and the American Revolution (currently on hold at the moment while I finish this American Bible Society project) and some of the thoughts I hope to include in a new narrative history of the revolution in New Jersey that will appear in a few years with Rutgers University Press. I focused my discussion of the Presbyterians in revolutionary New Jersey on John Witherspoon (a man), the Greenwich Tea Burning (an event), and Elizabeth-Town (a town).
I also attended a great breakout session on pre-revolutionary New Jersey.  Jonathan Sassi of CUNY-Staten Island presented a very interesting paper on anti-slavery in New Jersey prior to the Revolution (1773-1775).  He focused on the attempt of New Jersey Quakers to get the colonial legislature to pass an abolition bill.  Ironically, this bill was derailed by the American Revolution. In the end, New Jersey proceeded down the path of gradual, not immediate emancipation. This story is chronicled quite well in James Gigantino’s book, The Ragged Road to Abolition: Slavery and Freedom in New Jersey, 1775-1865).
I was thoroughly entertained by Brian Regal‘s presentation on the origins of the so-called “Jersey Devil.”  Regal traced the history of this New Jersey folk tale back to the 17th century Leeds family of the Pine Barren region and explained how the Leeds Devil became the “Jersey Devil” thanks to a curiosities museum in Philadelphia who tried to use the legend (and a kangaroo from Albany) to attract visitors.
Timothy Hack of Salem County Community College offered a historiographical overview of the American Revolution in New Jersey and challenged future historians to bring African Americans, women, religion, loyalists, and the Atlantic world into the narrative of the revolution in the colony. (Challenge accepted!).  He also challenged museums and historical sites to plan early for the 250th anniversary of the American Revolution by making documents accessible to researchers.  Hack called for an updated version of Larry Gerlach’s collection, New Jersey in the American Revolution, 1763-1783.
Finally, Chris Belitto, a church historian and medievalist at Kean, gave a fascinating talk on the way that New Jersey revolutionaries John Kean and William Livingston employed the classics in their arguments for independence.  Belitto’s talk made me realize that I need to know a lot more about Livingston as I move forward with my work on Presbyterians and New Jersey.
It was also a pleasure to chat with so many friends and colleagues from the New Jersey history community, including Jean Soderlund, Richard Waldron, Niquole Primiani, Jonathan Mercantini, Joseph Klett, John Fabiano, Tom Winslow, Rich Rosenthal, Richard Veit, and Karl Neiderer.
As a kid who grew up in the Italian-Slovakian New Jersey working class and was a first-generation college student, it was an amazing honor for me to get to speak at the 350th anniversary celebration of my home state.  I want to thank Sara Cureton, Niquole Primiani, and the rest of the conference organizers for inviting me.
While I was writing this post I noticed that Mary Rizzo, a public history professor at Rutgers Camden, storified the conference tweets.  Thanks, Mary.