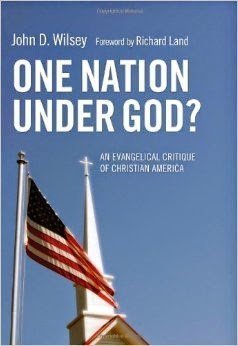 John Wilsey teaches history at the Southwestern Baptist Theological Seminary campus in Houston.  He is a real jack of all trades.  He is the interim pastor of a Houston-area Baptist church.  He teaches courses in history and theology to traditional seminary students, undergraduates, and prisoners in a maximum security prison.  He has written a good book critiquing the “Christian America” thesis and has a forthcoming book on American exceptionalism.

But I am writing about John today because he has recently written two great blog posts.

The first post, which appears at John’s blog “To Breathe Your Free Air,” is an honest account of the struggles and triumphs of writing his book on American exceptionalism.  His exhortation to “write, write, write” was something I needed to hear as I continue to push forward with my American Bible Society project.  If you need some inspiration to jump start a writing project, head over to Wilsey’s post.

The second post, which was recently published at Religion in American History, offers an assessment of American exceptionalist rhetoric in Christian school and home school American history textbooks. In the process he invokes the term “Americolatry.”  Here is a taste:

Combine the idea of American exceptionalism with the Christian America thesis—the idea that America was founded as a Christian nation—and you have a potent brew indeed, a super-charged nationalism which has an exceptional quality all its own. I have a word for this powerful ideological combination—Americolatry. Americolatry consists of a form of civil religion that entails the doctrine of American greatness, innocence, and superiority (e.g., Reagan’s “the last, best hope of mankind,” Albright’s “indispensable nation,” or David Gelernter’s America as “one of the most beautiful religious concepts mankind has ever known”(2)). Americolatry also entails the practice of religious devotion to America by inextricably linking Christian devotion to patriotism. In other words, to be a devoted Christian equals the uncritical acceptance of America as superior and morally regenerate.

Thanks for some good writing, John!