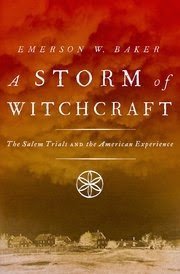 Emerson Baker is Professor of History at Salem State University. This interview is based on his new book, A Storm of Witchcraft: The Salem Trials and the American Experience (Oxford University Press, October 2014).

JF: What led you to write A Storm of Witchcraft?

EB: It has been a long and sometimes indirect path to write this book. For more than 20 years my research has focused primarily on understanding New England in the late seventeenth century, a time that gets little attention aside from the witch trials. For example, I believe that King William’s War was as important to the course of American history as King Philip’s War, yet there is not a single good history of it and its impact. In 1998 I co-authored a biography on Sir William Phips with John Reid. This provided me with a solid grounding in Massachusetts politics, frontier warfare and imperial policy in this era. As Phips was governor during the witch trials, I did my first research on witchcraft and I looked forward to more.

By this time I had been teaching at Salem State for a few years and I realized that there was more that needed to be said about the Salem witchcraft crisis. I became particularly interested in what happened after 1692, and why Salem became the “Witch City” when some European cities had witch hunts that dwarfed it in size. I knew I first needed to study more typical outbreaks, so I could put the larger and unusual Salem crisis in its proper context. So I examined a series of earlier cases of New England witchcraft, focusing upon the lithobolia (or stone-throwing devil) attack on a debauched Quaker tavern in Portsmouth, New Hampshire in 1682. The result was The Devil of Great Island: Witchcraft and Conflict in Early New England (2007). Meanwhile I spent summers directing excavations on a series of archaeological sites that were destroyed at the outbreak of King Williams’s War in 1689-1690, where I gained knowledge of the lifeways, material culture and architecture of the era. Thus armed, I was finally ready to take on Salem.

JF: In two sentences, what is the argument of A Storm of Witchcraft?

EB: The “perfect storm” of forces that came together in the Salem witchcraft crisis produced a critical moment for the fading Puritan government of Massachusetts Bay whose attempts to suppress the story of the trials and erase them from memory only fueled the popular imagination. The trials marked a turning point in colonial history from Puritan communalism to Yankee independence, from faith in collective conscience to skepticism toward moral governance.

JF: Why do we need to read A Storm of Witchcraft?

EB: We owe it to the many victims who refused to compromise their beliefs to learn their story for it provides valuable lessons and an important legacy for us. The deaths of 25 innocent people led to what may be the first large government cover-up in American history. This effort helped to discredit Cotton Mather, the last great Puritan, and his cause. It also began an American tradition of fear and opposition to the government, and serves as a sobering example used repeatedly ever since of the dangers of extremism and rushing to judgment. Yet at the same time, that effort to suppress the story of the trials would help lead to the establishment of the legal precedent of freedom of religion and freedom of the press.

I think the biggest contribution my book makes to understanding what happened in 1692 is to look at the largely unexplored politics of the trials. Why was it that the Court of Oyer and Terminer turned precedent upside down in 1692, quickly convicting everyone it tried? In answering that I look closely at the actions and motivations of the judges, as well as Governor Phips, who appointed them. Social and cultural historians (myself included) tend to forget that witchcraft was ultimately a religious crime that was judged by a secular and very political court.
Today we find ourselves with similar problems to those in 1692. Malevolent witches were real then, and terrorists are all too real now. The goal for both is the complete destruction our society – of everything we hold dear. How does society protect itself from a near-invisible threat? Especially when the efforts to defeat that threat endanger the very beliefs and freedoms we hope to protect?

EB: My parents passed on their great love of history to me as I grew up in central Massachusetts in a home surrounded by objects and documents from generations of ancestors. My interest in the past was also fueled by a series of really good History and Latin teachers. I learned to love old records though my summer job at the court house, where I researched property titles for my lawyer father.

I headed off to Bates College to major in History and then go on to law school, so I could be the fourth generation in the family firm. Once I started taking courses in colonial history with Jim Leamon, my thoughts began to change. The tipping point was when I worked on his archaeology dig on the Clarke & Lake Company headquarters on Arrowsic Island, Maine, a site that was destroyed during King Philip’s War. To discover that you could learn new things about early New England through non-tradition sources like material culture and archaeology blew me away and opened my mind to the amazing and limitless possibilities. That course changed my life. Jim has remained a mentor and good friend ever since.

EB: The past two books have gotten in the way of my longstanding efforts to write a history of New England in the seventeenth century based on its material culture (including the built environment and landscape). This project draws heavily on my archaeological work. Moving into the realm of experimental archaeology, I am also thinking of writing a book on colonial beer and ale recipes, and my ongoing efforts to recreate them with my microbrewer friends. And if no one writes a history of King William’s War, I may have to do that, because it is a story that really needs telling by someone other than Cotton Mather.