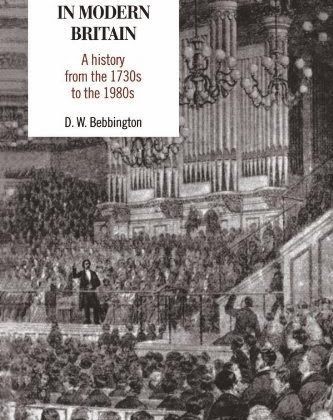 After Darren Dochuk offered this thoughts on the Bebbington Quadrilateral, Mark Noll of Notre Dame University took the lectern.  It was fun watching these two giants in the field–Bebbington and Noll–debating the history and definition of evangelicalism.

Noll argued that there was no such thing as a monolithic movement known as “evangelicalism.” (Yes, you read that correctly!)  The term is not helpful when it comes to writing historical narratives.  Noll preferred to say that many Christian groups have certain evangelical “traits,” but it is very difficult to think about some kind of unified movement.  He thought that Bebbington’s Quadrilateral was a helpful tool for identifying these “traits” or “essences,” but could not bring himself to embrace the idea that evangelicalism exists.  Throughout the talk and the Q&A that followed, Noll suggested that many Catholics, for example, exhibited evangelical commitments to the authority of the Bible, the centrality of the cross, and the need for evangelism, but they historically have had little in common with folks like Billy Graham.  When John Wilson of Books & Culture asked the panel how African-American conservative Protestants fit into the discussion, Noll concluded that they were a vibrant Christian movement who shared evangelical traits, but were not part of any specific movement known as evangelicalism.  He concluded: “There is no such thing as evangelicalism and David Bebbington has provided the best possible definition for it.” Needless to say, this brought loud chuckles from the audience.

In response to Wilson’s question about African-American evangelicals, Bebbington argued that most conservative Protestant African-American churches uphold the four prongs–biblicism, activism, conversionism, crucicentrism–of his Quadrilateral.  They could thus be viewed as part of evangelicalism.

Following Noll, Molly Worthen offered her thoughts on Bebbington’s Quadrilateral.  Rather than focus on the more traditional theological definition of evangelicalism, Worthen wanted to push Bebbington to consider a more social or cultural definition.  She argued that evangelicalism is defined by anxieties over the relationship between faith and reason–anxieties that are inevitable in a movement that lacks no real ecclesiastical authority.  How does one form a movement without an appeal to reason or a magisterium of some type?  Bebbington largely agreed with Worthen on this point, but still clung to the theological components of the Quadrilateral to define the movement.

Worthen then wondered if Bebbington’s Quadrilateral was still useful now that the center of evangelicalism had moved to the Global South.  I wish that there was more conversation on this issue because it is a very important one.

Worthen ended her talk by suggesting that evangelicalism is not going away anytime soon.  She may be right, but I have also found that many of my students at Messiah College do not identify with the term.  Some of them have never even heard of it.  Several tweeters who teach at Christian colleges tended to agree.  This leads me to wonder just how long the term (or the movement) “evangelicalism” will last.

In the end, perhaps Noll is correct.  Evangelical “traits” such as the New Birth, evangelism and social action, the centrality of the cross, and a belief in the authority of Bible are not going away anytime soon.  But what about evangelicalism?  This session made me wonder if “evangelicalism” is really little more than a movement founded by Baby Boomers in the wake of World War II that has just about run its course.

For example, the college where I teach–Messiah College–is certainly evangelical in essence, but it is also diverse enough–both in terms of student body and faculty–that it does not seem to identify with “evangelicalism” in the way that a place like Wheaton College might identify with the term or the movement.  While some of our students and faculty might find a theological and ecclesiastical genealogy in the organizations and churches affiliated with the National Association of Evangelicals or Christianity Today or Billy Graham, others come from Anabaptist, Pentecostal, theologically conservative or moderate mainline Protestant, or even Roman Catholic backgrounds.  Messiah is a very evangelical place.  It strongly adheres to the authority of the Bible, the belief that Christians should be sharing their faith and addressing social problems, the centrality of the Cross, and the need for conversion (although not everyone would completely endorse a belief in the New Birth).  But is it part of a movement known as “evangelicalism?”  Maybe.