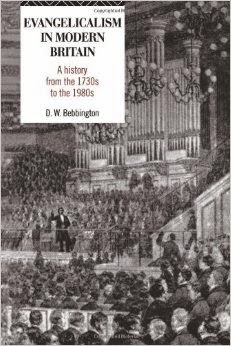 I spent a lot of time thinking about evangelicalism this weekend.  It was the focus of several high-powered panels at the biennial meeting of the Conference on Faith and History.  One of those panels was focused on David Bebbington’s “Quadilateral” of evangelical faith.  In his book Evangelicalism in Modern Britain, Bebbington defined evangelicalism using four “isms”: conversionism, biblicism, activism, and crucicentrism.  After twenty-five years, three prominent interpreters of American evangelicalism–Mark Noll, Molly Worthen, and Darren Dochuk–sought to reflect on the continued usefulness of the Quadrilateral.  At first I found it a bit odd that three historians of American evangelicalism were called upon to critique a book about British evangelicalism, but after listening to the entire session I am willing to admit that the Quadrilateral is, at the very least, a transatlantic concept.

Since this session was so rich, I have decided to cover it in several posts.  So let’s begin with Darren Dochuk’s thoughts on the Bebbington quadrilateral.  Dochuk, the author of From Bible Belt to Sunbelt: Plain-Folk Religion, Grassroots Politics, and the Rise of Evangelical Conservatism, suggested that we expand the quadrilateral to include the eschatological system of premillenialism, the power of the Holy Spirit, and Christian community or fellowship.  (When I tweeted some of Dochuk’s remarks, someone on my feed mentioned that Thomas Kidd, during a session on Bebbington’s book at a recent meeting of the American Society of Church History, had also suggested adding the Holy Spirit to the Quadrilateral ).
While a concern with the last days, a reliance on the power of the Holy Spirit, and a commitment to community are all traits that have historically characterized evangelicals, Bebbington argued, contra Dochuk, that these traits do not characterize all evangelicals and thus should not be added to the Quadrilateral.
Bebbington argued that not all evangelicals have embraced a premillennialist or dispensationalist eschatology.  For example, many evangelicals have been postmillennialists.  Rather than waiting for Christ’s return to establish his earthly millennial kingdom, postmillennialists believe that we are living in the kingdom and need to work hard at spreading the gospel and solving social problems as a necessary prerequisite for Christ’s return. In other words, there will be no 1000 year earthly reign of Christ following his return.
I think Bebbington is right here.  In fact, the view that evangelicals were eschatologically diverse has been around since a slew of historians in the 1970s and 1980s, including Dochuk’s own dissertation adviser George Marsden, criticized Ernest Sandeen’s reductionist argument in The Roots of Fundamentalism: British and American Millennarianism, 1800-1930.  If we are going to add premillennialism to the quadrilateral we need to exclude folks like Charles Finney T.T. Shields, J. Gresham Machen, and William Jennings Bryan from the evangelical fold.
Bebbington also suggested, contra Dochuk, that not all evangelicals were keen upon tapping into the power of the Holy Spirit.  This is a tricky one.  On one level Dochuk is right.  All evangelicals believe in the power of the Holy Spirit and its influence in their lives.  But, as Bebbington pointed out, not all evangelicals give it a prominent emphasis in their theology in the ways that Pentecostals or the adherents to the Holiness movement might.
There are many evangelical groups–the twentieth-century dispensationalists who taught at Dallas Theological Seminary come immediately to mind–who have been cautious about embracing the full power of the Holy Spirit in their lives and congregations. Many evangelicals, including Jonathan Edwards and some of the early fundamentalists, were skeptical of spirit-empowered religious enthusiasm, speaking in tongues, or the “baptism of the Holy Spirit.”  Many evangelicals who wanted their hearts to be “strangely warmed” (to quote Wesley) got out of the spiritual kitchen when and if the Holy Spirit fire got too hot.
Finally, Bebbington suggested, contra Dochuk, that “community” or “fellowship” should not be considered a defining characteristic of evangelicalism.  Were evangelicals concerned with this kind of togetherness?  Of course.  But evangelicalism was also very personal and individualistic.
I have argued elsewhere that evangelicals tend to be so interested in community today precisely because evangelicalism is such an individualistic approach to Christian faith.  We actually had a good discussion about this the other day in my History of American Evangelicalism class.
Stay tuned for more posts on this session.