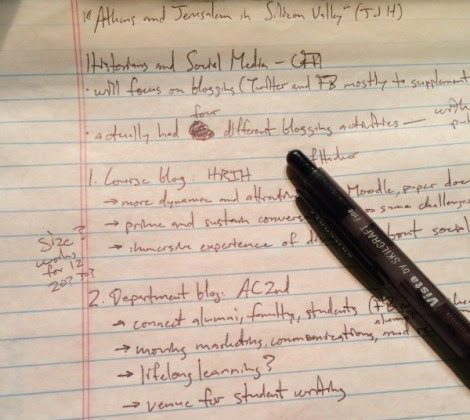 Today is Chris Gehrz‘s turn to post the presentation he gave at the Christian Historians and Social Media panel at the biennial meeting of the Conference on Faith and History, held last weekend in sunny Malibu, California. Many of you will know Chris from his excellent blog, The Pietist Schoolman.  But did you know that he runs 3 other blogs as well?

For an introduction to the session and the series of posts that will appear all week, see Jonathan Den Hartog’s post at Historical Conversations.  I also live-tweeted the session from the platform. You can read those tweets @johnfea1 or #cfh2014.  You can also read my contribution to the roundtable here.

Then there’s this blog, which started in June 2011 as a summer experiment and is still going strong over a thousand posts later. I’ve had several goals for this blog, probably none more important to my professional development than the way that blogging has forced me to work regularly at my writing. It’s also been my attempt to reach a public that goes beyond the academy: family, friends, fellow church members, and complete strangers read this blog.
Unlike John, I didn’t start the blog because I had a book to market. But blogging has no doubt provided a platform — e.g., for our forthcoming book on Pietism and Christian higher ed, for securing a handful of speaking engagements — and fundamentally reshaped my professional image at Bethel and well beyond. (“Oh, you’re the Pietist schoolman,” said the environmental historian who ended up sitting next to me at the CFH banquet last Friday night.)
Two problems that I emphasized at the conference:
1. I write less often than a John Fea, but I write much longer posts than John. On average, probably 1000-1200 words. (This one will end up around 1800, I think.) Granted, that often includes quotations of not insignificant length, but attempting to generate that much original content much five times a week (plus a Saturday links wrap that includes a fair amount of commentary) had me close to burned out this summer — when I scaled back to a thrice-weekly schedule and then started a four-week sabbatical.
2. “Exploring Christianity, history, education, and how they intersect” is broad enough that I regularly veer between audiences in a single week, and I struggle with the problem of striking the right tone. (I do have one technique that tends to serve me well in these struggles…)