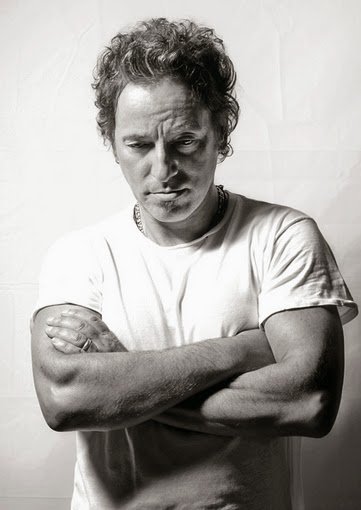 Bruce is going to be 65 next week.  Over at History News Network, John W. Johnson of the University of Northern Iowa offers three reasons why American historians should take notice:

1.  Springsteen holds an important place in the history of rock music.
2.  Springsteen addresses historical themes and events in his music.
3.  Springsteen is ubiquitous as a public figure.
Here is a taste of Johnson’s piece:
In 1984, Ronald Reagan appropriated the chorus from “Born in the USA” for his upbeat re-election campaign. Springsteen responded by inquiring from the stage: Has the president “actually read” the lyrics to “Born in the USA”? A key stanza features an archetypal veteran expressing some not so optimistic sentiments: “Down in the shadow of the penitentiary/Out by the gas fires of the refinery/I’m ten years burning down the road/Nowhere to run ain’t got nowhere to go.”
During the last few years, hardly a week has gone by without “a Springsteen story” hitting the news. Some examples: 1) Springsteen delivers the keynote address at the South By Southwest Music, Film and Interactive Festival; 2) Springsteen is recognized to receive Kennedy Center Honors; 3) Springsteen stumps for Barack Obama in the final stages of the 2012 presidential campaign; 4) New Jersey Governor Chris Christie claims to have attended more than 100 Springsteen concerts; 5) Fans of The Boss submit more than 2000 videos for possible inclusion in the crowd-sourced film, “Springsteen and I”; 6) Boss: The Biannual Online-Journal of Springsteen Studies publishes its first issue with articles bearing such esoteric titles as “Springsteen as Developmental Therapist: An Autoethnography”; 7) A scrap of paper with Springsteen’s handwritten working lyrics for “Born to Run” sells at a Southeby’s auction for $197,000; and 8) Springsteen stars in a short western, “Hunter of Invisible Game,” reminiscent of John Ford’s “The Searchers.”
Since 2005, long articles on Springsteen and his music have appeared in such serious publications as The Atlantic, The New York Review of Books, The New York Times, and The New Yorker. In 2013, Rolling Stone published Collector’s Edition—Bruce, containing pictures and four decades of Springsteen interviews. Perhaps only Bob Dylan, among American singer-songwriters of the last fifty years, has inspired more book-length studies than Springsteen.
Here’s another rough index of Springsteen’s impact on contemporary popular culture: My impressionistic survey of the music played in the background before and after commercial breaks on MSNBC’s “Morning Joe” reveals that Springsteen is by far the most featured artist. Occasionally the hosts and guests on the program even joke about who will be able to claim the privilege of having such Springsteen standards as “Badlands” or “Thunder Road” play over and around their comments.
So . . . love Springsteen or hate him. You just can’t ignore him.
If you’re a historian of recent America, Springsteen should be on your playlist AND in your syllabus. Now eligible for Medicare, Springsteen continues to create, perform, entertain, campaign and provoke.
A very happy 65th birthday, Bruce! Rock on!
I would also add that Springsteen is an important figure in American religious history.