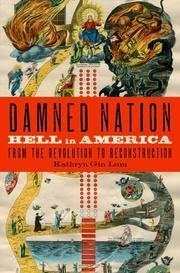 Kathryn Gin Lum is Assistant Professor of Religious Studies at Stanford University in Stanford, California. This interview is based on her book Damned Nation: Hell in America from the Revolution to Reconstruction  (Oxford University Press, 2014).

JF: What led you to write Damned Nation?

KGL: The bewilderment and bereavement of dealing with a loved one’s passing drove me to research the history of death as an undergraduate. I was surprised by how much has been written on death in comparison to what comes after. I found that I was less interested in death and more interested in how people’s ideas about the afterlife shape the ways they live in the here-and-now. Personal experience with the consoling and terrifying aspects of American Protestantism, and curiosity about the simultaneously ethnocentric and equalizing nature of the Protestant hell, also influenced my decision to write on the subject.

JF: In 2 sentences, what is the argument of Damned Nation?

KGL: Americans in the first century of nationhood were not just the millennial optimists they are often depicted as: they were also deeply worried that they might be damned instead of saved, in need of redemption instead of a “redeemer nation.”American evangelicals connected their own eternal welfare to their ability to save others, driving revivals, missions, and reform movements, even as the threat of hell also spurred others to adopt or create alternative beliefs.

JF: Why do we need to read Damned Nation?

KGL: Few historians have taken hell seriously, tending to dismiss the subject as arcane and verging on the bizarre–and yet hell was a subject that early Americans took with deadly seriousness. Many today continue to do so. Damned Nation treats the fear of hell as a powerful motivating belief, on par with the political and economic ideologies much more commonly treated by historians. The threat of hell touched people in all walks of life, including those disenfranchised due to their physical appearance, gender, and/or age. Damned Nation lets ordinary people speak for themselves in diaries, letters, and memoirs, alongside the published writings of the more famous, like Samuel Hopkins and Charles Finney.

KGL: To be honest, I thought American history was boring in high school: it was only a couple hundred years long and every US history topic under the sun had already been covered by historians anyway. It wasn’t until I took a series of amazing college courses on colonial and 19th century America, and on American religious history, that I began to see the richness of the subject. A summer program with the Gilder Lehrman Institute confirmed my interest. Behind-the-scenes archival visits and candid interviews with US historians convinced me that there could be no better job.

KGL: My next project was inspired by my location in the Silicon Valley, where faith in technology’s ability to improve human existence goes almost uncontested. I trace this faith back  to the nineteenth century, when many Euro-Americans believed that technology and Protestant commitment went hand-in-hand, and hoped that both would save the world. I’m interested in how technological development became a sign of religious difference, defining the “progressive Protestant” against the “stagnating pagan.” And I want to know what residues of these assumptions continue to color our interactions with so-called “developing” and “emerging” nations.

And thanks to Allyson Fea who facilitated this edition of The Author’s Corner.