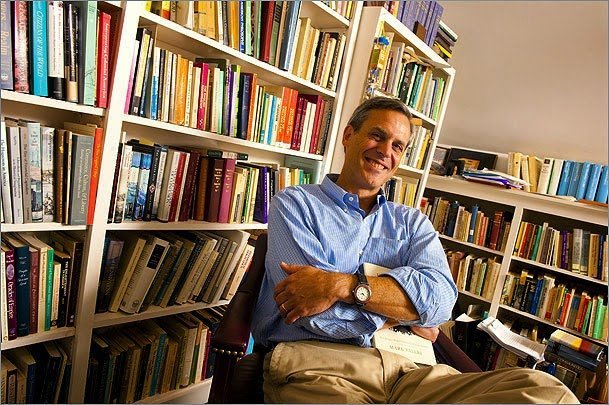 Mark Valeri is headed to Washington University.  Here is the press release:

The John C. Danforth Center on Religion and Politics at Washington University in St. Louis is delighted to announce the appointment of Mark Valeri as the Reverend Priscilla Wood Neaves Distinguished Professor of Religion and Politics.
Valeri is widely regarded as one of the most eminent scholars of religion in British North America, including the political upheavals of the revolutionary era and its aftermath. He focuses his research and teaching especially on the interplay between Protestantism and the rise of capitalism; Reformation theology and the political history of Calvinism; Puritanism; enlightenment moral philosophy; and the formation of a secular society.
Marie Griffith, Director of the John C. Danforth Center on Religion and Politics and John C. Danforth Distinguished Professor in the Humanities, remarked, “Mark Valeri is, by every measure, a socially engaged and intellectually profound scholar of great accomplishment, sustained productivity, and enduring creativity. The Danforth Center on Religion and Politics and more widely, the St. Louis community, will greatly benefit from his scholarly gifts and leadership.”
Leigh Eric Schmidt, Acting Director of the John C. Danforth Center on Religion and Politics for 2014-2015 and Edward C. Mallinckrodt Distinguished University Professor, commented, “Mark Valeri’s commitment to both undergraduate and graduate education is a remarkable opportunity for the students of Washington University. I know he will enrich the academic experience of any and all students who join us at the Danforth Center.”
Valeri comes to Washington University in time for the fall 2014 semester from Union Presbyterian Seminary in Richmond, Virginia, where he served as the Ernest Trice Thompson Professor of Church History since 1996. His prior appointment was in the Department of Religious Studies at Lewis and Clark College, where he won a faculty achievement award for outstanding teaching.
Valeri is the author of many articles and essays, and his most recent book, Heavenly Merchandize: How Religion Shaped Commerce in Puritan America, (Princeton University Press, 2010), received the 2011 Philip Schaff Prize from the American Society of Church History. It was also shortlisted for the 2011 American Academy of Religion Award for Excellence in the Historical Study of Religion and selected as one of Choice Magazine’s Outstanding Academic Titles for 2010.  The book analyzes social and moral transformations in the American economy from the early 1600s, when Puritans argued that personal profit should be subordinate to customary restrictions on trade, to the mid-eighteenth century, when Christians increasingly celebrated commerce as an unqualified good.
His other publications include Law and Providence in Joseph Bellamy’s New England: The Origins of the New Divinity in Revolutionary America (Oxford University Press, 1994), which won the Mackemie Prize from the Presbyterian Historical Society; The Works of Jonathan Edwards, Vol. 17: Sermons and Discourses, 1730-1733(Yale University Press, 1999); Practicing Protestants: Histories of Christian Life in America, 1630-1965 (The Johns Hopkins University Press, 2006), co-edited with Laurie F. Maffly-Kipp and Leigh E. Schmidt; and the co-edited Global Neighbors: Christian Faith and Moral Obligation in Today’s Economy (Eerdmans, 2008).
Valeri has received several fellowships, including an Andrew W. Mellon fellowship, a National Endowment for the Humanities fellowship, an American Council of Learned Societies grant, and a Lilly Endowment faculty fellowship.
Valeri earned the Ph.D. from Princeton University, the M.Div. from Yale Divinity School, and his B.A., summa cum laude, from Whitworth College.
The John C. Danforth Center on Religion and Politics at Washington University in St. Louis was established in 2010. It serves as an open venue for fostering rigorous scholarship and informing broad academic and public communities about the intersections of religion and U.S. politics. It is named for former U.S. senator from Missouri John C. Danforth, an ordained Episcopal priest who served three terms in the U.S. Senate and also was U.S. ambassador to the United Nations.