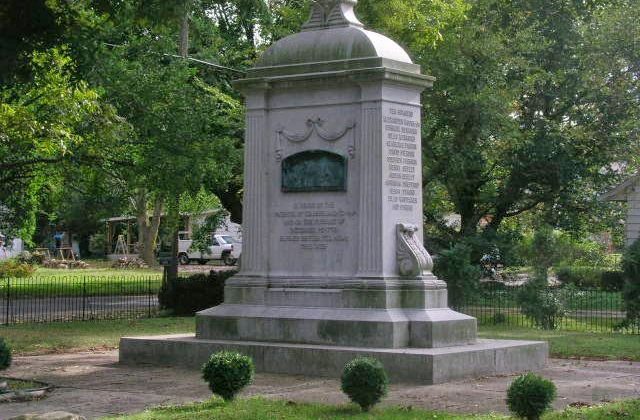 It is always nice when a reporter from one of my hometown newspapers calls and wants to talk history.

Last week I had a nice chat with Lisa Rose, a reporter for the Newark Star-Ledger, who was writing a piece on the so-called Greenwich Tea Burning.  Readers of “The Way of Improvement Leads Home” or The Way of Improvement Leads Home know about this 1774 act of patriotic rebellion that occurred in the small southern New Jersey town of Greenwich.  You may also remember that I have made some significant headway on a book about the history and memory of this event.  I hope to return to it somewhere in the future, assuming that I can secure some additional funding to support the “Greenwich Tea Burning Project.”

Rose’s piece provides a nice introduction to this oft-forgotten slice of revolutionary-era history. Here is a taste:

On the night of December 22, 1774, a group of South Jersey patriots braved the cold to stage an incendiary protest against British taxation.
The villagers hauled a stolen shipment of tea into the town square and set it ablaze, building a bonfire to express their defiance.
The Greenwich Tea Burning may not be as famed as the Boston Tea Party but it has been a source of pride for generations of residents in the Cumberland County hamlet along the Cohansey River. The town’s centerpiece is a monument, built in 1908, listing the names of the tea burners.
Over the years, folks have re-enacted the event, setting tea on fire during festivals marking centennial and bicentennial anniversaries. To this day, Greenwich’s identity is built around scorched tea as a symbol of courage and independence. The town’s annual charity 5k run is called the Tea Burner Race. Its logo is a flaming crate.
“There were six incidents up and down the East Coast where they destroyed tea,” said Bob Francois, a member of the Cumberland County Historical Society who will be giving talks about the tea burning on July 4 at Potter’s Tavern in neighboring Bridgeton.
Francois said, “The most famous tea party was Boston in December of 1773 and our tea party was the last and least famous. It wasn’t in a major city. It was in a backwater Colonial seaport and it didn’t get the attention that bigger cities like Annapolis or Boston or Philadelphia got.
“In Cumberland County, there were no Revolutionary War battles. The tea burning was a major happening in our county and even though it happened back in 1774, it’s still in the forefront and the locals really celebrate it.”
There is very little documentation of the Greenwich rebellion, said John Fea, an associate professor of American history at Messiah College in Grantham, Pa. He started researching the incident while preparing a doctoral dissertation on a pioneering 18th-century diarist, Philip Vickers Fithian, a Greenwich native who chronicled his experience working as a tutor on a Virginia plantation. In disturbing detail, Fithian described the treatment of slaves and the climate of racism in the South….
Fea said he looked for other firsthand descriptions of the uprising in historical newspapers but was only able to locate one brief article in the Pennsylvania Packet.
“We don’t know a lot about what actually happened that night,” said Fea, author of “The Way of Improvement Leads Home: Philip Vickers Fithian and the Rural Enlightenment in Early America.”
Fea said, “We know about the myths and legends that have grown up surrounding the Greenwich Tea Burning. They’re all based on oral tradition rather than historical evidence. Everything in Greenwich is about memory because these stories have been passed along from generation to generation. That’s fine but there’s a difference between history, what actually happened, and memory.”
Francois agreed that the stories told over time have been marred with errors and inconsistencies…
Teaching people about the tea burning is important, even if the details are scant, because it is a story of revolt in which the central characters are ordinary individuals rather than war heroes or firebrand politicians, Fea said.
“These men who burned the tea clearly saw themselves as connected to a larger patriotic movement,” said Fea. “It’s an inspiring example of grassroots resistance and the way in which local communities connected to the larger Revolution. The tea burning is what the Revolution looked like in a local town.”
Greenwich is a secluded village, with a population of less than 1,000, where the main thoroughfare is called Ye Greate Street. It’s right next door to Bridgeton, a once-booming factory town that’s been redeveloped several times over.
“When you drive from Bridgeton to Greenwich, it’s like you’re driving back in time,” said Fea. “All of the commerce, all of the trade went to Bridgeton during the Industrial Revolution. Greenwich has remained this remote place where they’ve turned to their history to build their identity. In many ways, the Greenwich Tea Burning is more of a 20th-century phenomenon than it was a 1774 phenomenon.”