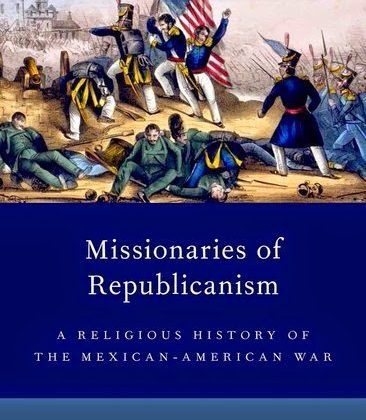 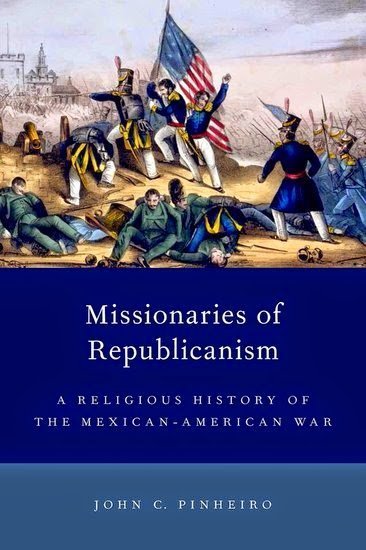 I was thinking about Lyman Beecher today.  He was one of two secretaries at the May 1816 New York meeting of local Bible society delegates who formed the American Bible Society.

Beecher, the father of Henry Ward Beecher and Harriett Beecher, was very concerned about the influx of Catholic immigrants to the United States.  He feared that they would settle the American West and eventually take over the entire country unless Protestants did something about it.  (See Chapter One of Was America Founded as a Christian Nation?)  His most famous anti-Catholic tract was “A Plea for the West.”

Over at Religion in American History, Charles McCrary calls our attention to John Pinheiro‘s new book Missionaries of Republicanism: A Religious History of the Mexican-American War.  As McCrary points out, Pinheiro’s book shows how anti-Catholicism (Pinheiro calls it the “Beecherite Thesis) informed both the supporters and opponents of American involvement in the war.  Here is a taste of McCrary’s review:

The term “Beecherite Synthesis” is useful because it emphasizes how, in the mind of nineteenth-century Americans, categories (especially categories of otherness) reinforced each other and melded together. We should see, then, for example, “the connection between religion and race, and the degree to which they are indelibly tied together in American history” (9), Pinheiro writes, with a nod to Ed Blum and Tracy Fessenden. We could write similarly of other pairings—religion and gender, religion and politics, politics and region, region and economics, and so on and so on. Given the, well, synthetic nature of the Beecherite Synthesis, should we find it odd that Pinheiro’s book is subtitled “A Religious History of the Mexican-American War”? Isn’t it also a political, racial, diplomatic, military, cultural history? Yes—and, even better, it’s a book that doesn’t seem to be very interested in the unnecessary lines demarcating these sub(sub)genres. This is not really a criticism of Pinheiro or his book, and for all I know it could have been the publishers’ decision and not his anyway. But the label “religious history” on this book, combined with the idea of a “synthesis,” prompts historical and historiographical reflection.

Pinheiro’s Beecherite Synthesis, like David Sehat’s Protestant Moral Establishment or Fessenden’s secularism, relied upon and even created a definition of “religion” in a particular context. In Beecher’s case, that context was the American frontier, during a time of immigration, national expansion, and financial uncertainty, written for a primarily white (Anglo) Protestant audience. We could call Lyman Beecher a religious figure; we could call A Plea for the West a religious book; we could call the burning of the Ursuline convent in Charlestown an act of religious intolerance. But their very religious-ness is entirely dependent on what “religion” meant in that historical context, and that meaning was synthetic. However, whereas historians readily acknowledge the constructedness of race or gender, religion often is treated differently. Thus, a primary task for historians of American religion ought to be to show how religious discourse is wrapped up with—constituting and constituted by, reinforcing and reinforced by, legitimating and contradicting—“other” discourses and knowledges. Otherwise, what exactly is to be gained by conceiving of one’s project as a “religious history”?
I have been hoping to interview Pinheiro for our “Author’s Corner” series, but we have not been able to connect.
If you appreciate this content, please consider becoming a Patron of Current.