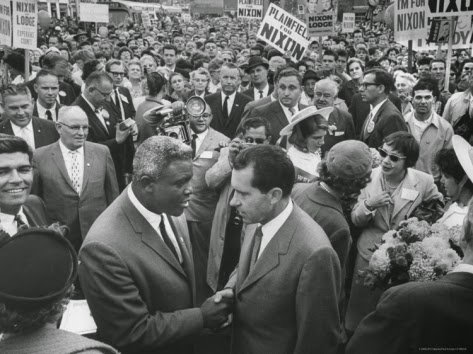 Check out this piece in the New York Times by “presidential historian” Michael Beschloss on Jackie Robinson’s political support of Richard Nixon in the election of 1960.  Robinson also campaigned for moderate Republican Nelson Rockefeller in 1964, but could not bring himself to support Barry Goldwater, the eventual GOP nominee. In 1968, he voted for Democratic nominee Hubert Humphrey because Nixon courted the support of segregationist Strom Thurmond.

Here is a taste of Beschloss’s piece:

In 1960, Robinson endorsed Nixon for president, declaring that the civil rights commitment of Nixon’s Democratic rival, John F. Kennedy, was “insincere.” In those times, an African-American Republican was by no means unusual. About 39 percent of black voters had supported the re-election of President Dwight Eisenhower and his vice president.

Jackie withstood intense pressure — including from his wife, Rachel — to follow King’s father in switching from Nixon to Kennedy; he later wrote that his decision had “something to do with stubbornness.” As a result, a ballplayer who had withstood death threats in 1947 to break the major leagues’ color barrier was denounced as a “sellout” and “Uncle Tom.” That November, Nixon won only a third of the African-American vote, a crucial factor in his hairbreadth defeat.