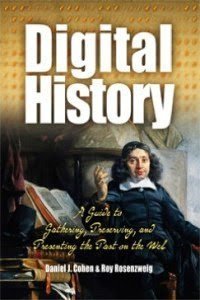 Stephen Robertson is the Director of the Roy Rosenzweig Center for History and New Media at George Mason University.  In a recent post at his blog, he laments the fact that recent conversation about the digital humanities, particularly Adam Kirsch’s essay in the May 2014 issue of The New Republic, have failed to address digital history.  Read his entire post, but here is a taste of the part of the post in which Robertson discusses the differences between digital history and digital humanities:
So what are the differences between digital history and ‘dh’/digital literary studies? In the current landscape in the US, broadly speaking, two stand out to me. First, the collection, presentation, and dissemination of material online is a more central part of digital history. Dan and Roy’s Digital History departs from the proliferating monographs and collections about digital humanities in being focused not on defining but on creating — or more precisely, on “gathering, preserving and presenting the past on the web.” At RRCHNM, our mission is to use “digital media and technology to preserve and present history online, transform scholarship across the humanities, and advance historical education and understanding.” This focus has seen the Center create open access resources for K-12 & university teachers, build exhibits with library, archives and museums, collect born digital records, crowdsource transcription, and build open source software. As Tom Scheinfeldt has pointed out, these practices do not originate in humanities computing, the dominant origin story for digital humanities, but in oral history, folklore studies, radical history and public history. I’m not saying that the presentation of material online is not part of digital literary studies: electronic scholarly editions and manuscript collections such as The Shelley-Godwin Archive are longstanding parts of that field, but, as the current debate indicates, at present they are not its predominant focus.
Second, in regards to digital analysis, digital history has seen more work in the area of digital mapping than has digital literary studies, where text mining and topic modeling are the predominant practices. The pioneering Valley of the Shadow project used mapping to understand and compare the two counties on which it focused. The first two winners of the AHA’s Roy Rosenzweig Prize for Innovation in Digital History were mapping projects: Digital Harlem: Everyday Life, 1915-1930 (which I created with collaborators at the University of Sydney) and Bobby Allen’s Going to the Show. Other prominent mapping projects include Visualizing Emancipation, ORBIS (The Stanford Geospatial Network Model of the Roman World), Mapping Texts, Slave Revolt in Jamaica, 1760-1761, The Roaring Twenties, PhilaPlace andMapping the Republic of Letters.
Again, that is not to say that mapping is not part of digital literary studies: Ryan Cordell’s Viral Texts is a noteworthy example. Nor is it to say that the textual analysis that predominates in digital literary studies has not been undertaken by historians. Dan Cohen and Fred Gibbs were among the first to experiment with data from Google books, and they went on to be part of the With Criminal Intent project datamining the Old Bailey trials.  Rob Nelson, in Mining the Dispatch, used topic modeling to explore the Confederacy’s paper of record during the Civil War. The next issue of the Journal of American History will feature an article by Cameron Blevins that uses computational tools to analyze the view of the world offered by a late-nineteenth century Houston newspaper (an online essay describing his methods is already available).