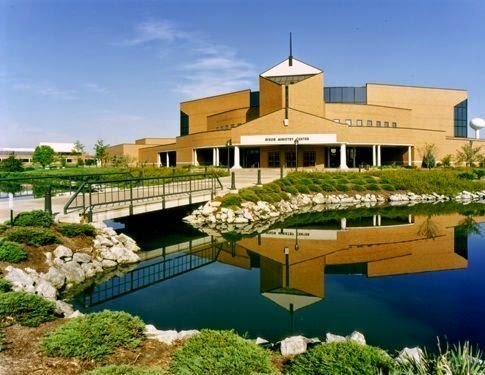 This comes from an underground student newspaper called The Ventriloquist that has been critical of the administration of this very conservative Christian college:

On April 23, distribution of the April issue of The Ventriloquist was forcefully shut down by Cedarville University president Dr. Thomas White and VP of Student Life Jonathan Wood.
As usual, distributors were set up outside the DMC to pass out copies to students leaving the university’s mandatory chapel service. Before chapel was dismissed, White and Wood walked around the distribution stations confiscating papers. Wood forcefully removed papers from the hands of at least one distributor.
When queried, White and Wood stated that The Ventriloquist required prior permission to distribute the issue. Per the student handbook (available online in PDF format here), the only activity that specifically requires prior permission is a “demonstration.” The handbook does not provide a definition of “demonstration,” but The Ventriloquist has distributed twelve issues in similar fashion over the course of the last four years with no warning or retribution from university staff.
The move to shut down The Ventriloquist is likely the latest in a series of shifts towards right-wing religious fundamentalism by the new administration. Over the past year and a half, the university has seen large-scale changes, including a new president, several new vice presidents, new organizational structure, and the departure of several administrators, 12 Bible faculty, and 30+ staff. White has also moved to alter the doctrinal statement and shifted to a strictly complementarian stance; the university no longer permits male students to enroll in Bible classes taught by women.

I can’t imagine a college president running around campus trying to forcibly remove a dissenting newspaper from the hands of students.

I had actually thought that Cedarville was moving closer to the evangelical mainstream, but it now looks like the school is returning to its fundamentalist Baptist roots.