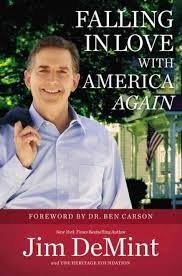 Jim DeMint is a former United States Senator from South Carolina. He currently serves as president of the Heritage Foundation, a conservative think tank in Washington.  He is also the author of a new book:  Falling in Love With Amercia Again.  In this book DeMint argues that it was people of faith, and not the federal government, who brought an end to slavery in the United States.  Here is a taste of an article about the book that appeared in today’s Tampa Bay Times:

Christian radio host Jerry Newcombe had DeMint on his show Vocal Point to talk about that book Falling in Love With America Again. DeMint defined conservatives as people who want to retain principles that have proven to move the country forward. The conversation turned to the Civil War and whether that showed that the nation’s founding guidelines didn’t always produce good results.
DeMint argued that the Civil War vindicated conservative principles. He first credited the Constitution for leading to the end of slavery, then he took a different tack.
“But a lot of the move to free the slaves came from the people, it did not come from the federal government,” DeMint said. “It came from a growing movement among the people, particularly people of faith, that this was wrong. … So no liberal is go.
Eric Foner, the Pulitzer Prize-winning historian of the Civil War, begs to differ.  In fact, he even invited DeMint to sit in on his course on slavery at Columbia University.  Again, the article from the Tampa Bay Times:
Eric Foner, professor of history at Columbia University and a leading Civil War scholar, rejected DeMint’s conclusion and invited him to attend the class he is teaching this semester.
“He will learn that the federal government was central to emancipation,” Foner said. “The Second Confiscation Act, Emancipation Proclamation and Thirteenth Amendment originated with the federal government, not to mention the role of the army in freeing slaves. Of course, many other actors were involved, not least slaves themselves who seized freedom. But it was a context created by the federal government — the war — that enabled them to do so.”
The Second Confiscation Act of 1862 declared that the federal government would seize the slaves of any rebel and they “shall be deemed captives of war, and shall be forever free of their servitude, and not again held as slaves.”
The Emancipation Proclamation of 1863, declared that slaves in the Confederate states — but not states loyal to the Union — “are, and henceforward shall be free.“
Read more about it, including a discussion of Christian faith and slavery, here.
If you appreciate this content, please consider becoming a Patron of Current.