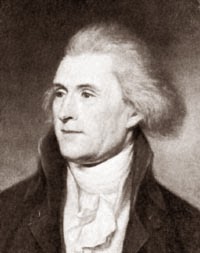 Recently Church History: Studies in Christianity and Culture published an article by Arthur Sherr entitled “Thomas Jefferson Versus the Historians: Christianity, Atheistic Morality, and the Afterlife.” The blog editors asked several historians to comment on the article.  John Ragosta commented here and the latest response comes from Baylor’s Thomas Kidd.  Here is a taste:
Barton’s The Jefferson Lies strained credulity by its selective use of evidence, leading Thomas Nelson publishers to pull the book from circulation in 2012. Scherr’s article respects standard historical practices in its use of evidence, and his analysis highlights many important aspects of Jefferson’s faith (or lack thereof). But as with other polemical views on Jefferson’s beliefs, Scherr’s thesis – that Jefferson considered himself no kind of Christian, not even a radically liberal one – outruns the nuances of the evidence.
And here:
Scherr’s article pits Jefferson against the “historians,” and it is quite an impressive roster of “scholarly adherents” whom Scherr regards as standing implicitly with the Religious Right in its co-opting of Jefferson. Thomas Buckley, Andrew Burstein, Peter Onuf, the late Edwin Gaustad, and others all seem to be part of those serving the interests of the Christian Right by “fecklessly attempt[ing] to depict [Jefferson] as a man of devout Christian faith.”
The worst offender, for Scherr, is Daniel Dreisbach. But I see little evidence in Scherr’s article that any of these historians, including Dreisbach, have tried to paint Jefferson (a la Barton) as a person of orthodox, Trinitarian faith. Instead, they have tried to account for Jefferson’s occasional comfort with government entanglement with religion, his fascination with the historical (though non-divine) Jesus of Nazareth, and his political alliance with many evangelicals, especially Baptists.
I covered many conservative and Christian historians’ rejection of Barton for the evangelical periodical WORLD Magazine in 2012. For one of those articles, I interviewed Dreisbach, who told me that he had a “‘very hard time’ accepting the notion,” advanced by Barton, “that Jefferson was ever an orthodox Christian, or that Jefferson ever embraced Christianity’s ‘transcendent claims.’” According to Scherr, Dreisbach is “closer to Barton than Barton’s opponents.” But in fact, across the ideological and faith spectrum Barton found virtually no scholarly supporters for The Jefferson Lies.