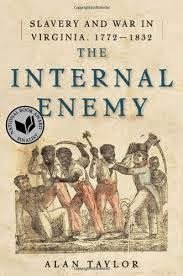 The Pulitzer Prizes have been announced.  Alan Taylor of the University of Virginia has won the Pulitzer in History for The Internal Enemy: Slavery and War in Virginia, 1772-1832.   This is Taylor’s second Pulitzer.  He won in 1996 for William Cooper’s Town.