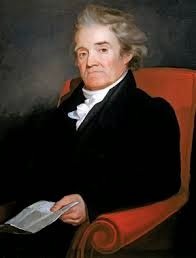 This morning I had the privilege of chairing a session on “Religion and Transatlantic Print Culture” at the annual meeting of the Organization of American Historians. Actually, I was pinch hitting for Kyle Roberts of Loyola University-Chicago, who could not make it to the conference.  My responsibilities? Introduce the panelists and read Roberts’s comments.

I expected a solid panel, but I did not anticipate learning so much.

Lily Santoro of Southeast Missouri State presented a paper on the ways in which American Protestants used British texts across the Atlantic “border” to shape a distinctive discussion of science and religion in the early republic.  She focused on intellectuals such as Yale professor Benjamin Silliman and Baptist minister Thomas Staughton who used the study of the natural sciences to support their republican and Christian faith.

Ashley Moreshead of the University of Delaware (both Ashley and Lily are/were Christine Heyrman students) talked about British contributions to American missionary periodicals.  Missionary magazines created a sort of imagined community of Protestants that transcended national boundaries.  Her paper reminded me of the work by Susan O’Brien, Frank Lambert, and others who have written similar things about the First Great Awakening.

(I hope these descriptions do some justice to the three papers).

I should also add that this panel was a model for how to present complicated ideas in a compelling, passionate way.  There were no bells and whistles (Powerpoints, handouts, etc…), but all three papers were presented in a way that was very accessible to the non-specialists in the room.  I don’t think I have ever heard names and phrases such as “William Paley,” “Edmund Burke,” “natural religion,” and “heathen millions” uttered in such an enthusiastic way.

In his comments, Kyle Roberts asked Den Hartog to think harder about how (and if) less popular Anti-Jacobin works were disseminated.  He wondered whether Santoro’s intellectuals and science writers were distinctly “American” in nature.  And he asked Moreshead to examine how magazine editors repurposed European content to suit their needs.

Den Hartog, Santoro, and Moreshead are doing some great work.  I look forward to reading their forthcoming works.  Happy to be a pinch-hitter. (I have always been a big fan of Manny Mota and Rusty Staub).