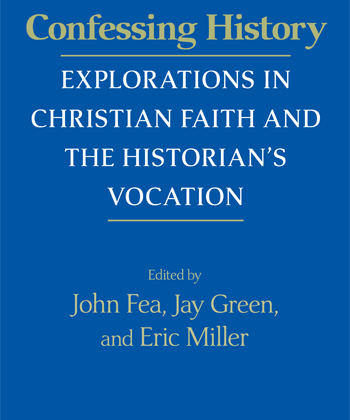 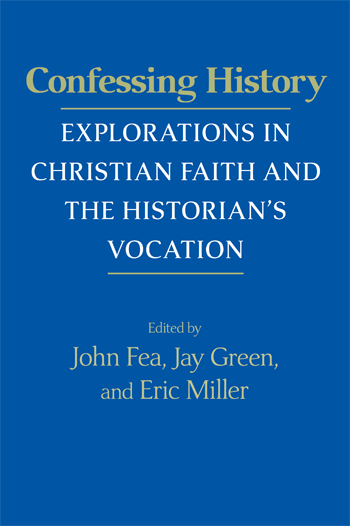 I have been meaning to post this review of Confessing History: Explorations in Christian Faith and the Historian’s Vocation.  I think I speak for Jay Green and Eric Miller when I say that we are grateful to George Marsden, one of the greatest American religious historians of his generation and the winner of the Bancroft Prize and the Merle Curti Award, for this very kind review.  The review appeared in a Volume 44 of Fides et Historia and is not available online.

Confessing History is an exceptional collection that I recommend to anyone concerned with the vocation of a Christian historian.  Although the editors set up the volume as an effort by mostly younger scholars to go beyond the older generation, or “current consensus, as represented, for instance, in the work of George Marsden” (9), I see this “going beyond” as almost entirely helpful elaborations of themes of which I heartily approve.  I find relatively little in the volume with which to disagree (although in some instances authors contradict each other, thus sadly limiting my potential agreeability). In most cases the authors’ suggestions are ones that I wish I had made, or made more clearly, or practiced more adequately.

The main theme that ties many of these essays together grows out of the question of whether in our efforts to overcome marginalization in the mainstream academy we have become too beholden to professionalism.  As co-editor Eric Miller puts it in his introductory essay, “Was being peripheral to the secular academy itself a noble and worthy end? (8).  That seems to me to be a fair enough question. Specifically, does gaining success in the eyes of the mainstream profession require us to compromise the radical claims we are making when we say that experiencing the reality of the triune God should have a profound impact on everything else that we think and do?

Mark Schwehn, who has mentored some of these younger historians in such matters, states the case with his characteristic grace in arguing that Christians can improve on the standards of the profession by adding Christian virtues, such as charity and humility.  Thomas Albert Howard elaborates a similar point, arguing that virtue ethics ought to characterize Christians’ engagement with the profession.  He suggests that the cardinal virtues of prudence, justice, courage, and temperance and the theological virtues of faith, hope, and love are still valuable guides for the life of the historian.  Bradley J. Gundlach adds that we can also benefit from the moral insights of the essential secular academy, and cites the work of Jackson Lears, Christopher Lasch, and Robert Bellah (less secular, I think) as examples.

Beth Barton Schweiger argues particularly strongly for a Christian ethical approach to history that is an alternative to the usual expectations of the profession.  Schweiger’s essay is also a model of how Christian reflections on doing history can benefit from being well informed theologically (a characteristic of many of the essay).  Rather than using knowledge as power, Schweiger argues, we should use it with charity.  We should love our historical subjects and treat them with generosity. The professional, however, does not reward charity or virtue, but treats knowledge as power and as the basis of promotion.  The emphasis on charity is a good one, and Schweiger illustrates how it might apply to the classroom.  In writing history, it seems to me, a similar emphasis might be put on loving one’s audience and trying to serve it though what one writes.  I agree with Schweiger entirely when she says we should flee careerism and embrace Christian vocation.  She aptly cites Miroslav Volf to the effect that Christians need to keep a distance from the professional culture, even while they do not leave it.

Most of the contributors make very helpful suggestions as to how we might maintain the priority of our Christian vocations while being in but not of the world of professional historians.  John Fea, for instance, describes how in teaching about Abraham Lincoln we have to first get students to take Lincoln seriously on his own terms (through techniques honed in the profession) and then we move on to our Christian evaluations  Lendol Calder reminds us that our professional assumptions can get in the way of loving our students and of thinking about their needs  Will Katerberg argues that the professional ideal of objectivity or detachment turns history into a commodity and that “historians should consider advocacy and utility to be legitimate scholarly professional concerns.” (113).  At the same time he emphasizes that we must balance such concerns with faithfulness to the sources and honest analysis so that we do not just use the past for our own agendas.  Una M. Cadegan offers a classic Roman Catholic sacramental way of dealing with this two-sidedness. The particularities of history that we study with the usual historical methods point to the glory of God and higher mysteries.  Thus an attitude of worship in doing history counters the disenchantment of the world characteristic of most of the profession.

All these (and others that I do not have the space to mention) are helpful insights that strike me as variations on the ancient Christian theme of commandeering “the spoils of Egypt” for Christian purposes.  Professional history involves a highly valuable and useful craft or set of skills.  A worthy Christian calling is that of the historian who practices that craft.  Doing that almost necessarily involves becoming associated with the contemporary academic profession of history, since a Ph.D. is the license almost necessary to do history for a living.  Like most things, the profession of history has some very good qualities and some not so good.  The tenure system that disproportionately rewards narrow specialization for advancement is particularly problematic  So are many of the ideologies and naturalistic epistemological assumptions that have been prevalent in the profession. Christians can learn many things by studying the standards of the profession, but they have to view them critically and to borrow from them selectively.

The one exception to such critically selective approaches that characterize this volume is the essay by Christopher Shannon.  Rather than making distinctions between what is useful in the historical profession and what is not, Shannon equates the profession with all its worst vices.  That provides him with an either/or choice between a radical Roman Catholicism and working within the profession, which he identifies with adopting worldview naturalism and betraying any announced intention that faith must precede understanding.  This dichotomizing provides him with strong rhetorical weapons, but leaves him with only the bluntest analytical tools.  That leads him to some false conclusions  One I can speak to with authority is that he equates my views with those of Thomas Haskell and then concludes that “both see any kind of providentialism or confessional history as inviting a return to the barbarism of the Crusades and the Inquisition.”  (183).  I am not quite sure how to respond with charity to such a distortion that is so contrary to what I think and have written.  I will say that Shannon’s earlier rhetoric on this topic helped flag some important issues to which this volume provides some fine responses.  Helpfully, the editors follow Shannon’s essay with an excellent and balanced reflection on “preaching through history” by James LaGrand, which in effect both answers Shannon and helps set the record straight.

Among the most important reminders in this volume is that made by Robert Tracy McKenzie to “Don’t Forget the Church” and seconded by Douglas Sweeney concerning our vocation to the priesthood of believers.  A crucial question, especially regarding the writing of history, has to do with the audience and for Christians the church is their most natural audience.  I think McKenzie may underestimate how many professional historians write books, including some popular ones, for church audiences or who teach Sunday school.  But it is important to do these things.  Mark Noll, who is presented in this volume as part of the old guard, has been a model in serving the church. Most of his books, like his recent Jesus Christ and the Life of the Mind (2011), are written for church audiences and/or for Christian academics and classrooms  Others have been more monographic and have met the standards of the profession sufficiently for him also to be regarded as at the top of his field.  Even these have been more concerned about Christians’ behavior in the modern world than about any secular or professional cause. These books have, however, allowed him to extend his vocation to the mentoring of Ph.D students, a worthy professional enterprise.  If I may speak of my own case, since I am so often referenced in this volume, I have not done as well as Noll in writing books addressed just to Christian audiences.  But I have thought of my primary vocation as a historian serving the church, and most of my books have been addressed to church audiences as much as or more than they were for secular professional colleagues . I can easily understand that in my efforts in other books to explain Christian scholarship to the mainstream academy my views might seem to concessive.  And perhaps they are.  Perhaps in this post-secular age Christian scholars can be increasingly bold.  In any case it is a great and genuine pleasure to see a generation of Christian historians, of whom this book provides just a sampling, who are dedicated to improving this enterprise and to carrying it beyond what others of us have been able to do.