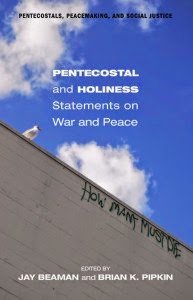 You would never guess from folks like John Ashcroft and Sarah Palin that the Assembly of God denomination has pacifist roots, but over at The Anxious Bench blog David Swartz introduces us to a new book revealing that Pentecostalism has a long tradition of pacifism.  The book is edited by Jay Beaman and Brian Pipkin and it is entitled Pentecostal and Holiness Statements on War and Peace.

This twenty-first-century iteration of Pentecostalism, however, would have been utterly foreign to movement progenitors. In the wake of the Azusa Street Revival in Los Angeles in 1906 and at the founding of the denomination in 1914, the Assemblies of God were officially pacifist. As late as October 1940, the Assemblies of God still claimed that “military service is incompatible with the gospel of Jesus Christ, and that a Christian cannot fully follow the teachings of his Lord and Master if he engages in armed conflict.” Several scholarly works have already recovered this forgotten history. Robert Mapes Anderson’s Vision of the Disinherited: The Making of American Pentecostalism (1979) and Grant Wacker’s Heaven Below: Early Pentecostals and American Culture (2003) treated this lightly. More recently, Paul Alexander narrated a full-scale account of Pentecostal pacifism in Peace to War: Shifting Allegiances in the Assemblies of God (2009).

ut Beaman and Pipkin’s book Pentecostal and Holiness Statements on War and Peace (2013) offers something new: hundreds of fascinating primary sources showing the pacifist orientation of the Pentecostal movement. Take, for instance, this 1938 column from the Foursquare Church, founded by the colorful Aimee Semple McPherson: “Should a Christian take up arms in time of war? The question is perhaps, a little late. It already has been answered—IN THE BIBLE. Until the Ten Commandments are repealed the Christian has no alternative but to stay aloof from war and its consequent destruction of human life. Should one be drafted? Well, prayer changes things. And the God who saved Noah from the flood, and preserved Daniel in the lions’ den and his brethren in the fiery furnace, surely can ‘handle’ so inconsequential a thing as a little draft-board. Prayer, wisdom and the proof of patriotic loyalty on our part, couple with a willingness to serve our country in non-combatant service should turn the trick for any obedient child of God.” Beaman notes that the Foursquare Church grappled with the pacifist impulse until WWII, when it capitulated (or came to its senses, depending on your theological persuasion) and embraced the use of lethal force and the preservation of a “Christian America.”