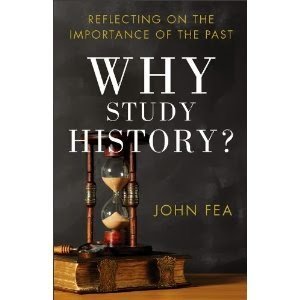 I am thrilled that Chris Gehrz (you may know him better as the Pietist Schoolman) is using my Why Study History?: Reflecting on the Importance of the Past in his Senior History Seminar at Bethel University in St. Paul, MN.  Thanks, Chris!

Students in the class are reflecting on the book at the Bethel History Department blog.

Here is a taste of Bethel history major Fletcher Warren’s take on the first chapter:

First, Fea, quoting Peter Hoffer, suggests that while the “historian’s paradox” may be unsolvable, we ought not be discouraged from the conviction that “something happened out there, long ago, and we have the ability […] to learn what that something is” (quoted in Why Study History?, p. 22).  I agree with Fea — at least in his latter point — but would go further by arguing that the “noble dream” of eventually developing a full and deep knowledge of the past is possible. In this, I sympathize with historian Gordon Wood, who expresses a confidence in this aspiration that Fea attenuates.
Second, Fea’s maxim that all history is revisionist in nature resonated with me. If the historian’s job is to “resurrect the past” (Why Study History?, p. 3),  it seems evident that we ought often to be disruptive; in the period between the events we study and the present, distortions and false-truths creep in. Allowing the past to breath its own air so to speak, often requires smashing present-day anachronism — often a dangerous task, for to the non-professional, personal conviction and social tradition are often more comforting than the difficult truths historians suggest.
These two facets of the historian’s role suggest that an answer to the question “What do historians do?” can be utterly justified in the face of existential criticism from non-practitioners:
Nice work, Fletcher.