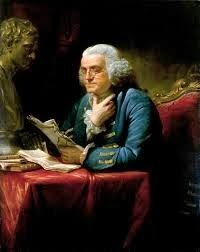 Over at American Creation blog Jon Rowe cites a letter from Benjamin Franklin to “Mrs. Partridge” on the death of one Ben Kent.  The letter is dated November 25, 1788:

“You tell me our poor friend Ben Kent is gone, I hope to the regions of the blessed; or at least to some place where souls are prepared for those regions! I found my hope on this, that though not so orthodox as you and I, he was an honest man, and had his virtues. If he had any hypocrisy, it was of that inverted kind, with which a man is not so bad as he seems to be. And with regard to future bliss, I cannot help imagining that multitudes of the zealously orthodox of different sects, who at the last day may flock together, in hopes of seeing each other damned, will be disappointed, and obliged to rest content with their own salvation. Yours, &c. B. Franklin.”