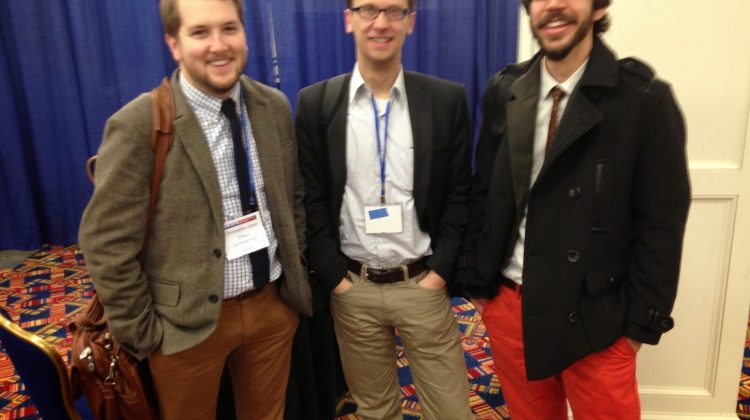 I really wanted to attend this session, but I had a conflict.

The American Society of Church History devoted an entire session today to Amanda Porterfield’s Conceived in Doubt:Religion and Politics in the New American Nation.  A panel of seasoned and younger scholars tackled Porterfield’s critique of the so-called “democratization” thesis–an interpretation of religion in the early republic most associated with Nathan Hatch’s The Democratization of American Christianity.

Over at Religion in American History, Michael Altman of the University of Alabama, who was one of the panelists, shared some of his opening thoughts.  Here is a taste of that post:

About a year ago I was having coffee with an American religious historian I greatly admire. We were discussing how we imagined ourselves, our work, and our audience. This historian looked at me at one point and said something to the effect of, “I wanted to show historians that religion is a powerful force. That it does stuff.” Religion does stuff. Isn’t this the theme of our subfield? I don’t walk the halls of a history department but I imagine this is what the religious historian says to their Marxist colleagues. I don’t walk the halls of divinity schools either, but I imagine it’s what church historians tell future church leaders. Religion is not epiphenomenal. It is not simply a mask for politics or capital. It does stuff.

For example, in their 2010 article in the Journal of the American Academy of Religion, titled “Everywhere and Nowhere,” Paul Harvey and Kevin Schultz described the ways historians of American religions have “found the persistence, continuity, and adaptability of American religion an impressive, motivating, guiding, and ever shape-shifting specter,” (p.131).  Motivating. Guiding. Shape-shifting. So many verbals. Because religion does stuff, right? Religion guides, motivates, adapts, continues, persists, right?

Or maybe it doesn’t. Maybe those moments of persistence, guidance, motivation, and continuity are actually the moments where religion itself gets constructed. Maybe it’s shape-shifting because it is constantly being rebuilt. But by who? And to what end? These were the questions driving my skepticism.

“Religion came to designate a diffuse realm, protected by the state, where people built communities, conceived relationships with God, and lamented the corruption of the state and of profane, mistrustful society,” Amanda Porterfield wrote (p.12). Here religion does nothing. People build, conceive, and lament and in that process they build a diffuse realm they call religion. And so, as she closes her introduction, Porterfield stoked my skepticism. Religion is not an agent, it is not a force, it is not a motivator. It is a realm, a category, a way of cordoning off this and not that. It is a product of distinctions and combinations.

In my reading, Porterfield’s most important contribution to American religious history is the shift from arguing that religion does stuff to an argument about how religion became a “diffuse realm” that Americans distinguished from the political and the profane. It is a shift from descriptivism to constructivism—a shift from looking for religion and seeing what it does to tracing out how Americans built this category they called religion.

If anyone who attended this session would like to write a summary post for The Way of Improvement Leads Home I would love to have one.

On a related matter, I ran into Altman, Christopher Jones, and Matthew Bowman at the book exhibit following the session.  A picture of these Way of Improvement Leads Home readers was absolutely necessary.  (See above).  I was also asked to comment on Altman’s red pants.  Nice.